Was this article useful?
Click the thumbs up >
THERE has been a bit of a tussle this year between the PR men at Ford, Mercedes-Benz and Volkswagen.

All three manufacturers have new panel vans being launched this year – Transit, Sprinter and Crafter – and the press officers have been falling over themselves trying to be first to get the collective bums of Britain’s LCV press on to the seats of their new contenders.

Although the Volkswagen Crafter won’t be launched in the UK until September, it was the VW boys who won the battle as a party of van hacks was flown out to Hamburg to test out the new vehicle in February. First drives of the Sprinter and Transit won’t take place until March and April respectively.

The Crafter is set to replace the aging LT panel van, which has been around for some 30 years now. It was developed in conjunction with Mercedes-Benz and will be built at its factory in Dusseldorf. But while many of the components are shared, the Crafter will have its own VW engines, modified suspension and an outrageously styled front end.

While the Sprinter’s bonnet is understated and stylish, the Volkswagen designers set out to shock – and they have certainly achieved their goal. At the launch, Dr Bernd Weidemann, Volkswagen chief executive officer for commercial vehicles, said: ‘We wanted to make our van brawny, reliable and flexible. It has a strikingly chiselled look that makes it stand out as a tough performer.’

More on this subject later.

To strike up a strategic partnership with its arch rival may at first seem strange but Weidemann said: ‘Partnerships like this are necessary now to achieve competitive cost-effectiveness. To be cost-effectve we need to build at least 100,000 vans a year and we could not do that on our own. This is a win-win situation for both Mercedes-Benz and ourselves.’

Volkswagen sold 36,000 LTs last year and aims to raise this figure by 10% next year. Weidmann said VW would be chasing fleet business but admitted that the firm had a tough task ahead with the launch of the new Sprinter and Transit in the same year.

One way he aims to gave extra market share is by keeping prices at the same level as the existing LT.

So how did the Crafter name come about? According to Harald Schonberg, VW’s head of sales and marketing, it stands for:

One for the next pub quiz maybe?

The new model is certainly a quantum leap forward over the old one. It will be available at 3.0-tonnes, 3.5-tonnes and 5.0-tonnes gross vehicle weight and in three wheelbases, with the addition of an extra-long overhang. There will be three roof eights – normal, high and super high. There will also be chassis cabs and crew cabs.

The rear side loading doors are massive – 1,300mm of width to be precise. This means that Europallets can be loaded sideways on.

Standard remote central locking can be controlled separately for cab and rear, meaning a driver can be loading the back end while not having to worry about the local low-life nicking his sandwiches from the cab.

In the front, VW says it has given functionality the highest priority. It’s a lot larger for a start, meaning even tall drivers will be comfortable. The seats are all new and seat height adjustment will be standard. Lumbar support and armrests will be available as options.

Meanwhile, the steering wheel is adjustable and its angle has been changed from 47 degrees to 32 degrees, giving a more car-like feel. The general trim of the cab is more car-like too, offering a friendlier feel. Noise levels have been reduced too with noise deadening foam elements in the A an B pillars.

Cubby holes and cup holders abound, while the middle section of the middle seats pulls out to reveal a handy desk. There are also extra storage spaces under the passenger seats which can be accessed by lifting the seat squabs.

Transmission is via a six-speed manual gearbox but there will also be a ‘Shiftmatic’ option for the 109bhp and 136bhp versions, based on VW’s DSG system. It can either be used as a full automatic or put in manual mode and ‘nudged’ up and down.

Maintenance levels are extended. The Crafter requires a service inspection every 50,000 miles and an oil change at 30,000 miles or two years. An onboard indicator will light up if it is felt a change is needed earlier.

On the safety front a driver’s airbag is standard, along with ABS brakes, ASR (acceleration slip regulation) and ESP traction control. Options include a passenger airbag and side headbags. A solid steel bulkhead also comes as standard.

OK, so let’s get this business of the Crafter’s bizarre front end out of the way first and we can then get on to the serious testing business.

When I first clapped eyes on the press pictures I sat open-mouthed for a moment wondering at Volkswagen’s nerve in producing such a monstrous conk. It has been variously described in the press as looking like a giant bean slicer and a basking shark.

In the metal, it’s a different story. You really do have to meet a Crafter in the metal to appreciate its stance.

It’s a monster no doubt. It has that ‘don’t mess with me’ look which will have old ladies fainting at the wheel when seen in their rear view mirrors.

But after an hour or two I had to grudgingly admit that I quite liked it. It’s a far cry from the stylish look of the new Sprinter but you’ve got to admire Volkswagen for at least trying to do something a bit different.

The rest of the body is chic and stylish though, with lots of creased lines and swirls and curves. There is plenty of plastic all round too, so those annoying knocks and scrapes should be kept in check.

Climbing aboard, the cab feels enormous compared to the old model and it is wonderfully light and airy.

That reworked driver’s seat is an item to die for. It seemed to mould itself into every curve of my body and is among to best I’ve sat in – either car or van. With plenty of adjustment every which way on both the steering wheel and seat, even lanky specimens of 6ft 3in like me will be able to get comfy.

And talk about cubby holes – I mean, how many does a driver need? There seems to be a space in every nook and cranny of the van, including two overhead shelves. 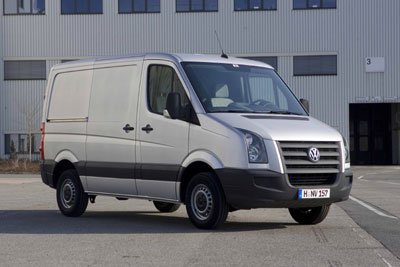 Those storage areas under the seats are handy for hiding any precious items and there are cup holders galore, along with a large cola bottle bin in each door. In the back, the side sliding door is huge and should make for easy loading. However, as with all other panel vans I have driven, the lights in the load area seem pathetically dim.

We drove all four engine options on the busy roads around Hamburg and the definite fleet choice has to be the 109bhp version which felt lusty and willing with a half load on board. Drivers will no doubt hanker for the more powerful models but there really is no need for the extra oomph, unless you have a five-tonner which will be carrying predominantly full loads.

My co-driver and I were able to talk in normal tones on our test route so the sound reduction was well worth it. And the dash-mounted gearstick proved slick and sure. Power steering too was nicely weighted and gave just enough feel.

IF you are going to link up with someone to make a van, I can’t think of a better partner than Mercedes-Benz. This new model is a triumph and I’m sure I’ll be saying the same for the new Sprinter in our next issue.

With vans like this on sale, Ford is going to have to pull out all the stops it has to retain its market leadership.