Marketwatch: Prices remain healthy as balance is ideal between supply and demand

Was this article useful?
Click the thumbs up >
THE first quarter of 2006 has been a good one for the prices of defleeted fleet cars, with some achieving their highest levels in two years.

Prices rose by an average of more than £400 year-on-year for a three-year, 60,000-mile car to £6,250, according to the latest figures released by BCA in its quarterly Pulse report.

The report claims the reason for such a healthy market is due to the ideal balance between supply and demand at the moment.

It said: ‘Values in the fleet and lease sector rose to their highest recorded point in over two years, with values actually increasing month on month in the quarter. Year-on-year, quarter one was over 7% ahead of 2005 and marginally ahead of last quarter versus guide prices.

‘Underlining what was a bullish first quarter, part-exchange values also rose, with the average value breaking the £3,000 barrier for the first time since Pulse began reporting.

‘The only sector to experience downward pressure on values was nearly-new, where values cooled in the first three months of this year after reaching their highest average point for two years last quarter.

‘There has been little movement in age or mileage figures and performance against CAP Clean by fleet and lease cars increased from 96% to 97%.’ 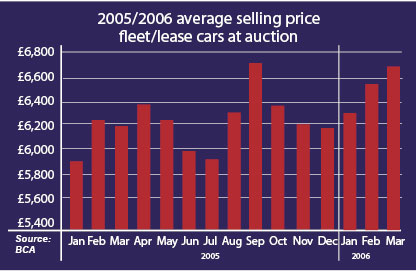 DIESEL continues to be sold at a significantly higher premium than petrol, even though the majority are hitting the auction floor with much higher mileages.

In Pulse, BCA reported: ‘In quarter one of 2006 the average mileage for diesel product at remarketing was more than 67,000, compared to under 49,000 for petrol. Price performance on diesel remained on average over 7% higher than petrol. This price differential is slightly down on quarter four, 2005, when it stood at 10%.’