Online only: Warning for your drivers travelling abroad

Was this article useful?
Click the thumbs up >
EUROPEAN countries are increasing penalties for drivers caught using a hand-held mobile phone.

Several countries have not only doubled their fines, but also imposed more penalty points for drivers travelling in their own countries.

A spokesperson from the Fédération Internationale de l’Automobile, European Bureau, confirmed that there is a general increase in both fines and penalty points across Europe this year. And 'we can see this trend continuing,' he added.

Most European countries require drivers to use a car kit or a hands-free device such as a Bluetooth headset when driving and speaking on a mobile phone in order to stay safe on the roads.

The UK has doubled fines from last year, Belgium has doubled fines to 100 euro, Turkey has increased fines to 30 euro and Norway’s fines are now 167 euro. Russia and Greece are currently reviewing fines and penalty points with increases expected during the summer months. Sweden is the only country left in Europe where no fines or penalties are imposed for driving while talking on a mobile phone.

For the first time this year, cyclists touring in Germany will also face a fine of 25 euros if found to be talking on a mobile phone while riding a bike. 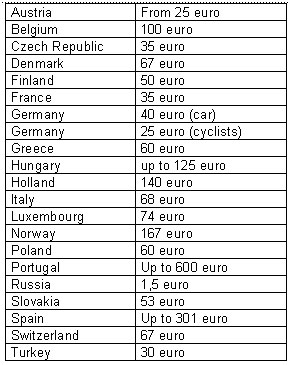