Limiting the damage after a crash occurs

Was this article useful?
Click the thumbs up >
FOR all the work fleet managers do to prevent accidents and general damage to vehicles, the cold hard truth is that damage will happen. And the larger the fleet, the more accidents there are likely to be.

But there is always a silver lining to any cloud. Even though you may be faced with a repair bill – or worse – every incident can teach you more about how to avoid another one happening again.

Bill Pownall is motor risk manager at insurance firm Norwich Union. He believes it is essential to form guidelines for drivers so that they know what to do and how to act should they have an accident.

Did I say accident?

Pownall explained: ‘There’s a tendency to refer to the coming together of metal as a crash. The word ‘accident’ suggests there is an element of chance to it and that’s rarely the case. It’s all about getting a culture of including more crashes in the overall health and safety of your organisation. There’s a need for companies to include instructions for drivers on what to do in the event of a crash.’

This process starts much earlier than some might expect. Think of the last time you assigned a vehicle to a driver. How was it done?

Pownall said: ‘Normally when a vehicle is allocated to someone, they are thrown the keys and asked if they know where it is parked.

‘There’s a need to show them the vehicle and give them a drivers’ handbook, stating policy and procedure. They need to know their policies and what to do in the event of a breakdown or an accident. Tell the driver where the equipment is that they might need. So often drivers are given nothing.’

A good idea is to create a ‘bump card’ – an accident report form kept in the vehicle, to be filled in should a prang occur. It’s also worth giving drivers an idea of how they are expected to behave.

‘The driver needs the tools,’ Pownall said. ‘Bear in mind that your driver is your first line of defence. You can reduce the chance of someone making a claim against you, and if you don’t take details of the incident, you’ll never know what’s happening – you’ll just keep paying out.’

Pownall said this applied to all drivers, although staff in vans are more prone to accidents because of the size of the vehicle and the difficult places they have to go to.

He said: ‘To give them a kit is a weapon in itself. Photographs are far more beneficial than a couple of pages of script. You can’t really go wrong and it’s a comfort to the driver as well. Film cameras are better, because digital images can be changed.

‘Spending 15 to 20 minutes talking to the driver and explaining the sort of action they should take, even if they just return to the van and find it damaged, will pay for itself.’

When preparing an accident form, think about the questions that are needed.

‘If the driver jots the answers down on an A5 sheet, they won’t be babbling over the phone when reporting it,’ Pownall said. ‘Writing it down allows you to take a couple of breaths and then pick up the phone. It makes the reporting process simpler. Important things to note include the location of the accident, the road layout, how many people were in the vehicle, any existing damage to the vehicle or any other vehicles.’

Equipping a driver to deal with an incident can also defuse tension, Pownall said.

‘If your driver gets out of a vehicle and acts professionally, the likelihood of someone trying to take advantage of them is reduced and it reduces the chances of litigation.’

After everything has been sorted out, review the information gathered to find out what can be learned from the incident.

Pownall said: ‘Interview the driver so they can learn as well. They might have been going a bit too fast, reversed without looking, that kind of thing. Do whatever you can as an organisation to prevent a reoccurrence of that one incident. Review accident and crash details on a regular basis to identify trends and implement any remedial measures to reduce the risk.

‘If you’re not recording, you just process the claims and hope the insurance premium doesn’t go up too much.’

It may seem like extra work, and it is, but the benefits can be considerable, Pownall said. ‘There are real bottom line savings to be made, quite apart from preventing people being injured or killed.

‘Drivers should be encouraged to report incidents and also near misses, which you can learn so much from.’ 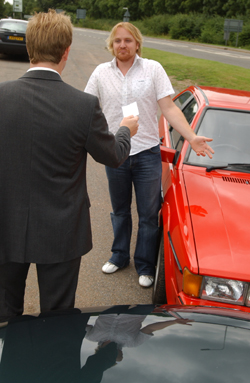 Equipping a driver to deal with an incident can defuse tension