Was this article useful?
Click the thumbs up >
NEW cars are usually unveiled by either a senior representative from the company or a glamorous model, but Honda took a different approach when it revealed the sporty Civic Type S.

Forty staff from the company’s Swindon manufacturing plant were on hand to take the wraps of the Type S, a sporty model to sit below the Type R and which debuts the look of the new three-door Civic.

The Type S, which goes on sale in January, is planned to continue to lower the average age of Civic buyers.

Since the radical-looking new model went on sale in January 19,000 models have been sold – more than the entire old Civic range managed last year. And the average age of buyers is now eight years younger than before – a key aim when Honda launched the car.

Harvey Hughes, Honda’s corporate operations manager, said: ‘The age profile for Civic is tumbling, especially for the diesel models which are now 10 years younger at between 35 and 45 years old.’

Honda also revealed that 66% of new Civic sales are conquests from other manufacturers – showing that the car’s bold styling hasn’t deterred buyers.

Also on display was a concept version of the new Civic Type R. Due to go on sale in March, the hottest Civic packs a 200bhp punch from its 2.0-litre engine and will feature more aggressive styling than the Type S. 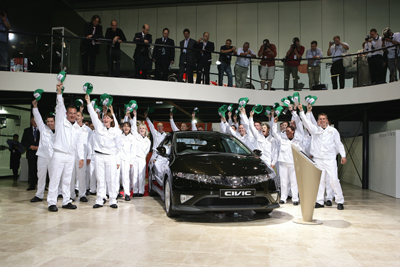