Was this article useful?
Click the thumbs up >
WITH 240bhp and snarling good looks, the hot Leon Cupra was the star of the show for SEAT.

But fleet and business sales manager Andy Webb said the slightly more practical – but still racy – Leon FR was the big news as far as fleets were concerned.

The 200bhp FR was launched a week before the show, and while it loses a little power to its cousin the Cupra, it will be more appealing financially to fleet managers and company drivers.

Webb said: ‘The FR will be successful in fleet because of its sub-15 insurance group and its price against the competition.

‘The running costs and residual values are also good – both CAP and Glass’s are putting it on or just below 40%. It’s an emotional car that draws people in to it, but there are also very rational business reasons for purchasing it.’

SEAT expects the FR to make up 25%–30% of Leon business sales. The Cupra, on the other hand, is not expected to do more than 5%.

The Spanish carmaker is preparing to embark on a campaign to raise awareness in the fleet sector, with several ride-and-drive events planned in the near future.

Dealers are also being talked to about becoming business sales centres, with the dialogue aimed at establishing what SEAT UK can do to help them best serve fleet customers. Such centres should be up and running by the end of the year.

The company’s line-up is to be expanded when a larger version of the Altea designed to sit between the Altea and Alhambra people carrier will be launched this year. 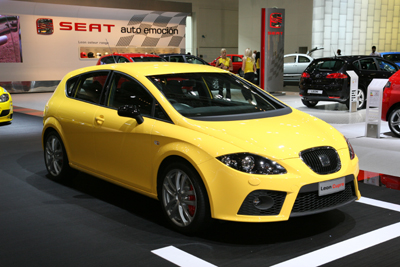