Was this article useful?
Click the thumbs up >
ON the face of it, rock superstar Madonna and the Vauxhall Astravan don’t appear to have a lot in common. But look closely and you’ll find several similarities.

For starters, both have enormous staying power in an ultra-competitive market. Both have triumphed where others have failed and both have proved incredibly professional performers over the years.

And let’s face it, both are pretty damned good at what they do.

The Astravan first broke cover in 1982 and was then just one of a host of car-derived vans. Over the years, while the Vauxhall has gone from strength to strength, all the others have fallen by the wayside and the Astravan is now the only car-based offering in its sector.

Two years ago, a new Astra car was launched, while the van version was still based on the old model and production moved from Ellesmere Port to the Katowice plant in Poland.

But now the van is back at its old home near Liverpool and appears in its fifth incarnation. And what a stunner it is.

It may lack the payload and load volume of its pure van brethren, but the likes of the Ford Transit Connect, Citroën Berlingo and indeed even the Vauxhall Combo can’t hold a candle to the Astravan in terms of looks and road manners.

So why does Vauxhall alone still offer a car-derived van when the likes of the old Ford Escort van bit the dust some years ago?

Purely because the customers keep demanding it. An amazing 49% of Astravan buyers are ‘loyal’ customers who have bought one before. And with a following like that, Vauxhall bosses would be mad to kill this golden goose.

Everything is new about this latest contender. It has looks to kill for, especially when clad in bright red paintwork, and has been tweaked from the car version with the aim of being the ultimate driver’s van.

Every component from the Astra car has been assessed and redesigned where necessary for commercial vehicle duties – and that design has been done by engineers in England. For example, the chassis and front axle have been adapted for different engines in the range and the steering set-up has been designed so that it alters the level of assistance depending on vehicle speed and rate of wheel turning.

In the cab, the seats have been completely remodelled with longer squabs and are different in Club and Sportive variants, the two spec levels offered in the range. In the back, the new model has a longer wheelbase and a completely flat load floor, with an extra 58mm length and 9mm width over the old model. Payloads have been increased by up to 45kg.

THE new Vauxhall Astravan is purely and simply the best looking van on the roads today, bar none. It’s also the best handling bar none too, which gives two good reasons for buying it over the Combo and suchlike. There’s another reason too.

Unlike the Combo et al, it will fit into the average garage, so valuable clobber can be locked away out of sight.

On our test route through the mountains of North Wales, the 1.3 CDTi and 1.9 CDTi models were available for appraisal and colours ranged from blue through silver to red. But rather like with Ferraris, the red ones looked stunning, leaving the others to pale into relative insignificance.

The wheels of this van are worthy of mention as they look to all the world like alloys until you kick them and realise they are made of plastic.

Vauxhall calls them ‘structured wheels’ and the secret is that the steel underneath follows the contours of the plastic. Simple when you think about it, but no-one else seems to have grasped this concept.

You can still buy alloys at £250 for four if you really want them but it doesn’t seem worth it as no-one else will notice.

Inside, the cab is all black and silver, as with the Astra car, and the seats are noticeably better than on the old model. We drove both the 1.3 Club and a 1.9 Sportive and the bigger model had deeper seats with better side support, to pander to those more sporty drivers (which is a good reason for it to be shunned by most fleet buyers!)

The only let-down is the lack of little cubby holes that van drivers like. But you can hardly blame Vauxhall for that – it’s a problem all small vans suffer from.

The 1.3 CDTi is likely to be the big fleet seller and we asked why Vauxhall bothered offering the 1.7 DTi at all.

Apparently some buyers are still unconvinced that a 1.3-litre engine is up to the job, so let me set the record straight here and now. It’s a little belter.

Modern diesel technology means you don’t need any more cubes than that to produce a willing, perky performer – and mated with a slick six-speed gearbox (and with a 300kg load of sand aboard), this van never struggled, even on some steep inclines.

The following day we got our hands on the 1.9, and although it proved the more able performer – we hardly ever needed to change gear, such was the immense amount of torque on offer – we’d have to question whether, for fleet purposes, it is worth paying an extra £2,100.

As for handling, the Astravan is in a class of its own. It is taut and competent on the bends and tackles most road conditions in a way that no other van can.

AS long as you don’t need the extra 0.8 cubic metres of load space and the extra 58kg of payload that the Combo offers, drivers will love you to bits for buying them an Astravan. 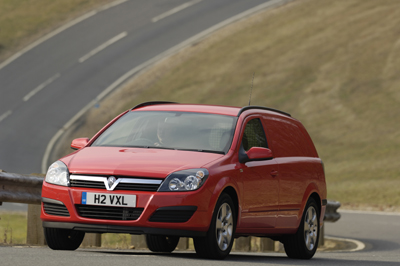