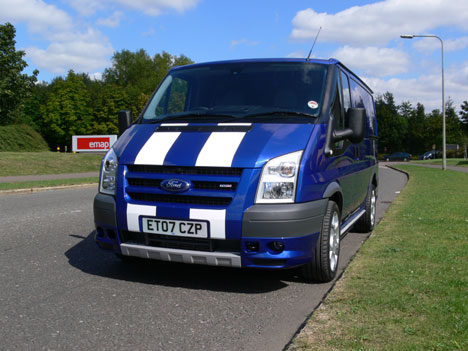 Some super vans hide their lights under a bushel. The Ford Transit Sportvan, on the other hand, shouts its sporting aspirations from the rooftops.

The jazzy white stripes on the front shout ‘don’t mess with me’ while the alloy wheels clad in low- profile tyres scream ‘look at me’.

We were only surprised that there weren’t flaming wheelarches on offer from the options list.

For £18,750 ex-VAT, you get as standard front and rear spoilers and side skirts, 18-inch alloy wheels and low-profile tyres, twin exhaust pipes, a unique colour (Performance Blue) and ‘go- faster’ white stripes. Air-conditioning and cruise control come as part of the package.

On the safety front the Sportvan gets driver and passenger airbags, ABS brakes, ESP traction control and a Quickclear front windscreen.

What makes the van feel extra lively is the 228 lb-ft of torque which gives it an amazing amount of grunt on the road. And don’t forget that drivers who pay 22% tax and plump for this vehicle will pay just £55 a month in BIK tax.

I just don’t get this ‘understated’ thing that the Teutonics seem to love. If I’m driving a fast van, I want everyone to know – and everyone will know when this van arives.

I wasn’t the only one to be impressed. As I drew up at a junction on the first day of my test, a driver in a battered Vauxhall Movano pulled up alongside and yelled “Nice one, mate!” at me through our open side windows assuming, I suspect, that this was a natty custom job rather than an off-the-shelf variant.

That’s something that’s never happened to me before.

But this van isn’t all about bling – it is as practical as any other Transit under the skin.

The powerplant is quiet and muted on fire-up and even when pushed, there is no gruffling and growling.

That huge torque shows itself as soon as the vehicle moves off – it feels as fast as the 174bhp Volkswagen Transporter I drove recently, for example.

We really didn’t want to hand this one back after our test week – who could resist the charms of such a dazzling dandy?