The latest vehicle to put itself up for Fleet Van long-term scrutiny is this Citroën Relay, sporting a jaunty coat of cherry red paint.

We’ll be putting the van through its paces for six months and reporting on its merits – or otherwise as the case may be.

This Relay is the smallest example on offer, weighing in at 3.0-tonnes gross vehicle weight in short wheelbase low roof height guise.

But it’s still a chunky performer offering a payload of 1,155kg and a loadspace of eight cubic metres.

The first point to notice about this van is that it is a very stylish package, with plenty of plastic padding round the sides to keep it from annoying knocks and scrapes.

The aforementioned paintwork, too, sets it off to a tee.

Entry is via remote plip locking and with security in mind, the front and rear of the van can be opened separately.

It’s a big climb up into the cab, which means that the driver has a great panoramic view of the road ahead.

I passed a Ford Transit the other day and seemed to be sitting a lot higher than the driver of that van.

Mention must also be made of the driver’s seat, which is a dream. 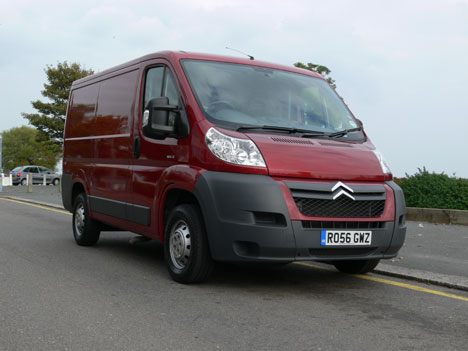 It’s hard yet supportive and hugs the body from neck to knees.

There is also a lumbar adjustment – which I have set at full stretch – and a fold-down armrest for lazy motorway journeys.

A great deal of thought has gone into the cab and there are enough cubbyholes that I’m for anyone’s needs.

There’s a pop-up clipboard on the centre console while the middle of the back of the third seat folds down to reveal a little desk with clip and two coffee cup holders.

On the minus side, as I discovered yesterday, there isn’t a coffee cup holder anywhere near the driver’s right hand.

A curious omission, I feel.

Our van has ply-lining in the back, which is a cheap but essential extra in my book at around £150.

This Relay features a four-cylinder 2.2-litre common rail HDi powerplant and as it already had 14,000 miles on the clock when we received it, there was none of that old diesel tightness present.

The Relay has 100bhp on offer but it feels a lot quicker owing to the fact that there is also a meaty 184lb-ft of torque on tap at a very low 1,500rpm.

It’s a trick that many of the manufacturers now employ and really makes this van fly.

Mention, of course, must also be made of the Relay’s standard Smart-Nav system that is part of the package on all Dispatches and Relays.

Citroën came up with this unique selling point a few months ago, in a bid to distance its models from the ones offered by Peugeot and Fiat (the Relay is the same as the Peugeot Boxer and Fiat Ducato).

It’s a ploy that seems to be working as Citroën had one of its best sales months on record in September.

Now I’m one of those old groaners who doesn’t like new-fangled technology and refuse point blank to spend hours poring over a manual working out how to use these units.

But the Citroën sat-nav is something else.

For a start, it’s linked to the Trafficmaster system so when you key in a destination it will automatically take you round any hold-ups.

And keying in a destination couldn’t be simpler – you just tap on the little envelope (it’s a touch screen system) and tap on the letters and figures you want (SS3 9SA or whatever).

In the meantime the system warns of approaching GATSO cameras and the like. It also incorporates a Trackstar tracking system if the vehicle is stolen.

I don’t know about you but that, in my book, is a pretty impressive free gift and I’m surprised Peugeot and Fiat haven’t responded in some way.

The Relay hadn’t been with me for 24 hours before it was pressed into service to help number one son move into a new flat.

We loaded it up with the usual paraphernalia – washing machine, fridge freezer, settee etc and if anything, the ride was even better than when empty.

The load didn’t impinge on the van’s performance.

When it first arrived, the built-in fuel economy meter was showing 34.6mpg but after a few days of long distance driving this has improved to 36.6mpg.

Bearing in mind that 20 years ago a van of this size would struggle to return 20mpg, that’s a pretty impressive figure.

Well apart from the cup holder, there is a just one so far.

The handbrake is situated to the right of the driver and on a couple of occasions when I’ve jumped enthusiastically out of the cab, the end of the lever has nearly taken the rear end out of my trousers.

One day, I feel, I’m going to do myself a real mischief.

This problem apart, the Relay is proving an early winner.