Was this article useful?
Click the thumbs up >
The new Nissan Cabstar and its twin brother the Renault Maxity are unique in their sector – they are, as far as I can judge, the only vehicles that have had some degree of thought put into the styling of their exterior.

And as such Nissan should be congratulated on producing a chic, stylish truck that stands head and shoulders above its more dowdy counterparts.

The Cabstar has carved out an enviable little niche for itself over the years – you still see hundreds of them on the UK’s roads covered in rust and loaded down like worn-out old donkeys.

But they never seem to die.

This new version looks so fresh that it seems almost too good for this country’s builders and suchlike.

The cab boasts extra room, the engine is more powerful and the business end is better than ever.

IF you fancy yourself as a bit of a trucker, you’ll love the Cabstar.

With a hard, upright seat and a steering wheel almost at horizontal, you could easily be driving something much bigger.

While the Cabstar isn’t exactly built for long journeys I managed a couple of trips of over 100 miles and didn’t have any complaints.

The gearchange is surprisingly slick for such a vehicle while the power steering is balanced just on the light side of centre.

However, I should have ordered our test vehicle with a ton of sand on board. Riding empty, the Cabstar skits about like a wet hen. Hit a sizeable bump and you could well lose a few fillings.

The 2.5-litre 130bhp powerplant copes admirably and the Cabstar lopes along nicely, smoothing out the bumpy bits.

There are no complaints about the load area. At a tad over three metres in length and with a payload of just over a one and a half tons, it should suit most needs. 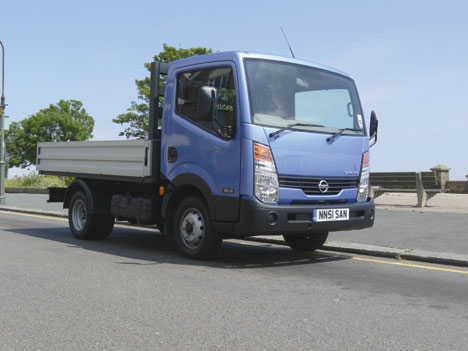 IT looks good and is a whole heap better than the old model, so expect to see quite a few new Cabstars on the road soon.