Isuzu Truck UK has moved into smart new headquarters in Hatfield, just off the A1M – and the move has brought with it a fresh determination to increase market share among staff at the niche manufacturer.

The 52-strong team realises fully that it has its work cut out to prise the UK’s van fleet operators out of their deals with more established manufacturers, especially as at present it effectively only offers one model.

But what Isuzu Truck lacks in brand offerings, it certainly makes up for in commitment and team spirit.

Fleet Van was invited to tour the new offices and we were immediately struck by that fact that the relatively small team of staff had distinct advantages over their cousins at the major players.

After all, how many can boast that the managing director talks to them every day, or that everyone in the building knows everyone else?

And talking of managing directors, how many give their home phone number out to major clients in case those clients want to call up at 11pm for a good moan? 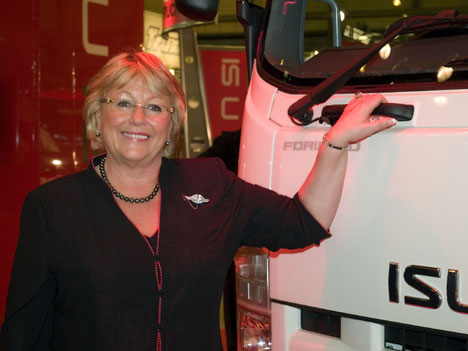 That’s exactly what Isuzu Truck MD Nikki King (pictured) has done – and so far in her entire career she’s only had eight calls!

“I’m not going to stick my head above the parapet and boast about the reliability of Isuzu trucks without putting myself in the firing line,” Ms King told me.

“If there is a problem with my vehicles that has not been sorted out satisfactorily, I want to know about it.”

This commitment to going even one extra mile than the extra mile travelled by all the other truck makers appears to be bearing fruit slowly but surely.

In the 11 years since the firm was established in the UK, there has only been a 2% staff turnover.

And Isuzu Truck UK never has to advertise for new people – there is a queue for jobs already.

The new HQ represents a £3 million investment by the firm – and particularly important in the new set-up is training.

In fact, 60% of the 19,000 total square footage of the Hatfield centre is taken up with a training facility for technicians from the various Isuzu dealerships across the country.

But these dealer employees don’t just come to learn how to fix Isuzu trucks, although that part forms the core of the training programme.

Ms King said: “We decided that we wanted our technicians to be better than those from other manufacturers so we give them training in life skills too.

“For example, if someone has broken down on the side of the road and one of these people comes along to fix the vehicle, the customer will often be angry and so we offer an anger management module.

“Our technicians are also trained in customer care, people skills and accounting.”

Next year, Ms King plans to start an IT course along with courses for service managers and salesmen.

She also plans the Isuzu Academy, which will be set up to recognise the excellence of its staff.

However, Ms King does not underestimate the task of increasing the firm’s market share.

She said: “It has been difficult establishing our network in the UK and interesting large fleet buyers.

“We may be small in the UK but Isuzu is a huge firm and we have to show these fleets just how big it is.

“What we offer that the other players don’t to such an extent is a brand based around customer service. We have never lost the passion about our work.”

Isuzu offers trucks which range in gross vehicle weight from 3.5 tonnes to 7.5 tonnes.

Next year, the firm plans to start importing a new F series which will offer GVWs of between 10 tonnes and 18 tonnes.

At present there are 60 dealers in the UK, although this number is expanding all the time.

Isuzu’s customer care focus seems to be paying off.

Conversely, the total market is up 9% (see table below).

Ms King is hoping that the new heavier trucks coming in next year will refocus the thoughts of companies that run mixed fleets including 3.5-tonners and channel them in Isuzu’s direction.

She added: “Everything we do is based on us becoming a big manufacturer – and we intend to do just that.”