Was this article useful?
Click the thumbs up >
OCCASIONALLY us journalists are lured abroad on exotic trips to drive a ‘new’ van, only to find when we get there that the vehicle in question is a facelift with little more than different headlights and cabin trim. It’s a cruel trick.

But no-one could accuse Nissan of such chicanery if its last two launches are anything to go by.

Last year, we jetted off to Crete for the arrival of the new Nissan Navara, a truck that proved a quantum leap ahead of the old model – and indeed the opposition – in terms of looks, engines and drivability.

This time we found ourselves in Madrid for the unveiling of the new Cabstar, which goes on sale this month.

And once again you couldn’t imagine a vehicle that was more different from its predecessor. Most of the contenders in this sector – called cab-over-engine – are fairly utilitarian affairs with a definite plasticky Japanese feel. In comparison, the Cabstar is European through and through – indeed it is built at Avila in Spain – with a dashing exterior, high quality plastics and seating materials in the cab and a lusty new set of common rail diesel engines pumping out anything up to 150bhp.

At the launch, Pierre Vallett, Nissan’s European LCV manager for sales and marketing, revealed that Nissan was launching a new push in van sales entitled ‘Value Up’ as he believed the European car marketplace was becoming saturated.

He pointed out that Nissan actually started off as a commercial vehicle manufacturer in the 1930s before adding cars to its portfolio and believes the firm will sell a total of 434,000 CVs this year worldwide.

Increased sales, he said, will come from this new strategy which sees fresh models (like the Cabstar), increased value, an improved dealer network and dedicated LCV sales teams.

In mainland Europe, for example, Nissan is teaming up with Volvo Truck to form joint dealerships, while extended warranty and breakdown packages are also available.

Paul Gozzard, Nissan LCV fleet sales manager in the UK, added that out of 235 Nissan dealers in Britain, 55 had been designated as Business Centres, with specially trained staff to deal with LCV customers. Opening hours had been extended and premises had been transformed to make sure they could deal with all of the Nissan LCV range, while in the event of a breakdown, replacement vehicles would be offered.

Turning to the new Cabstar, Vallett described it as a ‘smart compact truck’ which was designed and built in Europe and definitely not a Japanese product.

The interior of the cab has been widened by 15cm while thanks to some clever jiggery-pokery, the exterior has only been extended by 7cm. Meanwhile the A-pillar has been straightened to give extra space in front of the driver.

Vallett said: ‘This vehicle looks like a truck but it has car-like ride and handling. It also has best-in-class payload and best-in-class turning circle, making it very manoeuvrable in city streets.’

Underneath, there is an all-new ladder frame chassis with five different gross vehicle weights from 2.8 tonnes to 4.5 tonnes, three wheelbases from 2,500mm to 3,400mm and single-cab and double-cab versions. 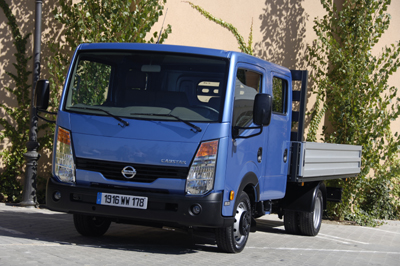 In the UK, all models up to 3.5-tonnes gvw will be available in chassis and dropside formats and prices are likely to start at under £15,500 ex-VAT.

ARE they putting something in the tea at Nissan’s design headquarters? First of all we were stunned by the macho lines of the new Navara and now we have a classy-looking little truck that for all the world could be a 40-tonner from the pictures.

Those chunky lines simply put the Cabstar on a different playing field to its rivals such as the Mitsubishi Fuso Canter and Toyota Dyna, which now look distinctly ‘last century’.

Climbing aboard is an easy matter – there’s a step and a grab rail for those who can’t manage it on their own, although it isn’t a very big climb up.

And what a transformation in the cab. Those old bargain basement plastics are gone, along with the workaday dash. In their place is a dashboard that wouldn’t look out of place in a passenger car.

There are plenty of storage spaces both above the windscreen and below it and even a special slot for A4 paperwork.

The seats are more upmarket affairs too. The driver’s is hard, flat and upright – comfortable too on long journeys – although there isn’t any side support at all.

The middle seat in the front folds down to form a handy desk, but passengers of more rotund proportions probably won’t fit in to it.

On the other hand, the double-cab version we tested had plenty of legroom for three more passengers in the back, although the middle seats in the front and rear only have a lap belt. Mind you, most Cabstars won’t be undertaking marathon journeys so seat comfort probably isn’t a top priority. 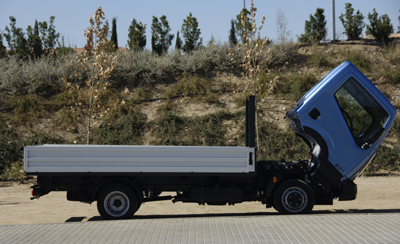 We tested both 130bhp and 150bhp models and both engines fire up with a quiet, powerful thrum – no rattling and clouds of black smoke here.

The cab offers fantastic views all round and there are two giant mirrors on either side to aid safety on the road. On flatbed models, reversing and manoeuvring is a doddle as you can see the rear of the vehicle by looking out of the back screen.

Once on the road, the Cabstar’s paradoxical nature once again shows itself.

Its driving position is pure truck – an upright seat, a steering wheel almost at 90 degrees to the driver’s body and that typical cab-over-engine gearstick that is set beside the driver’s body. But it feels just like a car to drive. That gearchange is the slickest of any vehicle in the sector, the power steering is light – a little too light for my personal taste – and the Cabstar will happily throw itself into fast corners and come out smiling.

First gear is hardly needed unless you are carrying a full load and going up steep hills. Our half-loaded models happily pulled away in second and even on steep inclines, the 150bhp never needed nudging down into fifth.

On a specially-created slalom course, we tested a long wheelbase model and found it made easy going of the cones that had been laid out, making the Cabstar an ideal vehicle for inner city deliveries.

ONCE again, Nissan has not only moved the goalposts but has put one of its vehicles on to an entirely new playing field, leaving the opposition to play a very big game of catch-up.

Our only concern with the Cabstar is that maybe – just maybe – it is TOO competent for the purpose for which it is built. Do Britain’s white truck men really deserve a vehicle this good? 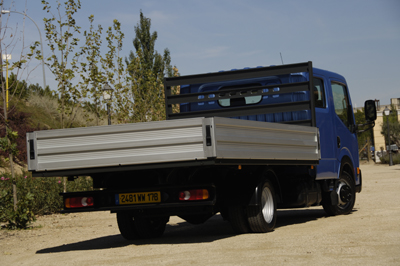 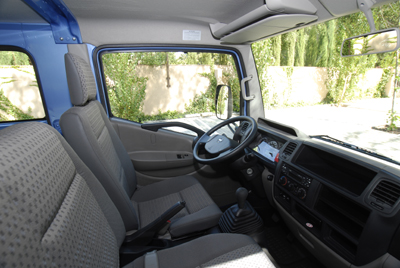