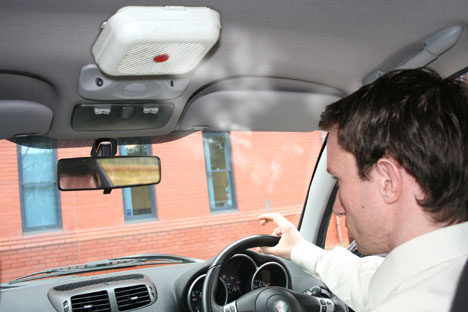 A LEASING company has come up with a solution that aims to clear the fog of confusion surrounding the imminent workplace smoking ban.

FagNav, from Masterlease, is a telematic smoke detector designed specially for cars.

If anybody in the vehicle lights up, FagNav emits a high-pitched alarm while a signal is sent via satellite directly to the fleet manager.

Masterlease says FagNav, which is due to be launched on April 1, will help businesses react properly to the new law, which treats all company vehicles as an extension of the office.

Smoking will be forbidden in any vehicles that are used by more than one person on business-related journeys.

A spokesman for the company said: ‘The smoking ban is due to present huge problems for businesses, whose drivers could be breaking the law without them knowing. FagNav will act both as a deterrent to drivers and also allow businesses to keep track of whether people are breaking the law at the wheel.

‘FagNav will also put an end to the sensitive issue of whistle-blowing. Junior members of staff may be reluctant to report a manager who is forcing them to smoke passively, but with FagNav installed they won’t need to worry – fleet managers will be informed automatically.

‘Masterlease has always recommended banning smoking altogether from all vehicles that are driven on business – aside from the health risks, they cause a considerable distraction.’