Green transport: Past, present and future of the fleet Volts-wagon 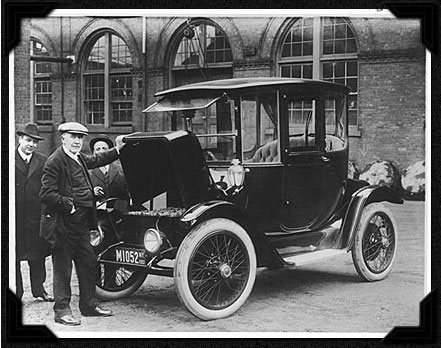 Electric vehicles have been touted as the next big thing for longer than you might think.

The first electric carriage was conceived back in the 1830s by a Scotsman, Robert Anderson. It ran on non-rechargeable cells, as did the first small-scale electric car, designed in Holland by one Professor Stratingh.

In 1899, a Belgian-built electric racing car – La Jamais Contente – set a world land speed record of 68mph. That same year, electric cars outsold petrol and steam-powered rivals in the US. They were not as noisy or smelly, and did not require gear changes – something that was tricky on early petrol-powered cars.

But as the popularity of the car grew, people wanted to travel longer distances. This was the electric car’s Achilles’ heel. Crude oil was also getting cheaper, meaning petrol was more affordable. And most importantly, Henry Ford started mass production of the petrol-powered Model T, driving down prices and leaving the more expensive electric technology behind.

By the 1930s electric vehicles had all but vanished. The oil crisis of the 1970s saw a handful of electric delivery vehicles pop up in the US, but sales didn’t really take off.

Throughout the 1990s several of the major manufacturers produced electric cars in the US, but again they proved prohibitively expensive.

In the UK, recent electric advances have largely been confined to small city cars, such as the G-Wiz, or conversions of ‘traditional’ cars such as the Smart ForTwo. But these have been niche cars, produced in small numbers and only appealing to die-hard environmentalists or those attempting to dodge London’s congestion charge. There have been few serious, cost-efficient electric vehicles suited to fleet needs.

Until now. There has been quite a bit of excitement over the Modec electric van, which its makers tout as the first electric vehicle designed from a commercial point of view rather than a green one.

Coventry-based Modec says its vehicle will be able to compete with, and beat, traditional diesel delivery vans, and heralds it as the future of urban commercial transport. Modec has a number of justifications for such confidence and, on paper at least, things look promising.

The battery is rented on a monthly basis – the cost will depend on usage – and will power the vehicle up to 50mph with a two-tonne payload for around 100 miles on each charge. It also avoids London’s congestion charge, road tax and operator licence, and Modec says the pence-per-mile costs will be comparable to a diesel equivalent. Electricity costs will be about four pence a mile.

The electric motor delivers 102bhp and 221lb-ft of torque and the vehicle has a turning circle of just 10.8 metres.

The argument sounds convincing and has attracted some big-name customers. Supermarket giant Tesco is the first to take delivery of the vans and Hildon Water will be close behind.

Tesco has ordered 15 Modecs, 10 of which will be used at its new ‘environmental store’ in Shrewsbury and the other five in London. Assuming they prove as cost-effective as the firm hopes, Tesco plans to increase its electric fleet to between 100 and 300 over the next three years.

Pete Clifford, Tesco’s operations development manager, says the attractions of the Modec are that it is emissions-free and quiet – ideal for urban deliveries, particularly in the evening.

Duncan Vavangas, Tesco’s fleet engineering manager, says the firm wanted to be first to get the electric vans for the credibility it brings with it.

‘We’re doing our bit for the environment,’ he says, adding that the new technology will bring a whole new range of challenges.

‘It’s exciting but slightly worrying,’ he says. ‘We are fitting out a whole store with a new fleet that has not been tested in the real world.’

Although it might not have real-world testing, the Modec has undergone extensive testing at Millbrook proving ground in Bedfordshire and in Germany with ABS maker Bosch.

The manufacturers are making great play not only of its environmental credentials but also its practicality. The vehicle is initially being sold through existing commercial vehicle dealers.

Dealer development director Michael McRedmond says: ‘They know the market and they know the people they are selling to. It wouldn’t be viable to set up a dealership to sell this vehicle alone.’

Selling is centred in London for the moment, with three dealers and five outlets and a team of mobile service engineers will serve customers outside of London for the time being.

‘We’ll be looking at other city dealerships around the country in future,’ Mr McRedmond says.

Advancing technology could soon free the electric vehicles from the confines of the city.

Modec’s electrical engineering manager, Chris Sheehan, says battery technology is fast improving – he expects a three-fold increase in capacity in the next five years. Future generations of Lithium-Ion batteries could give ranges of up to 300 miles, enabling intercity capability.

Modec is determined to prove that going green needn’t mean a hit to the wallet. The fleet industry and the wider world will be watching with interest to see if it succeeds – and finally propels electric power to the top of the tree.