Was this article useful?
Click the thumbs up >
FORD has defended the decision to keep the Mondeo name, claiming the new car will change perceptions of the name.

Steve Adams, Ford’s vehicle line director at the Genk plant in Belgium where new Mondeo is built, admitted that the stuffy image of Mondeo Man could be a hindrance. But he said Ford was reluctant to drop the Mondeo name because of the fleet success of previous models.

The battle was to balance Ford’s desire to up the perceived quality while retaining the advantages that previous incarnations have held for fleets.

Speaking as the first production Mondeo rolled off the line in Genk, Mr Adams said: ‘We’d be crazy to ignore our old business but we want to give the car ‘premium-ness’ – the BMW 3 Series and Volkswagen Passat have introduced a level that customers expect.

‘We have done everything to make sure it’s attractive to fleets. The insurance, repairability and service costs are areas we’ve focused on. People are saying ‘this car is too good for Mondeo Man’.

But there are a lot of positive strengths from using the name. Fleets operators will see these benefits in terms of price, fuel economy, insurance ratings and so on. We have tried to make sure we take that as a launch pad but not create the perception that Mondeo is only a fleet car.’

Mr Adams said new Mondeo’s increased style should win over those dismissive of the name. He added: ‘The number one way of getting people into the car is giving them a style they like.

‘If it looks good and the price is right then customers will come to us. We have put in huge investment in making sure this car has presence so people well say ‘hey, I’m interested in buying that’.’

Mr Adams said Ford benchmarked Audi and BMW for the interior quality of its new car.

‘I’ve got no fear of putting Mondeo up against any of those competitors,’ he said. ‘We’re still very confident in this sector.’ 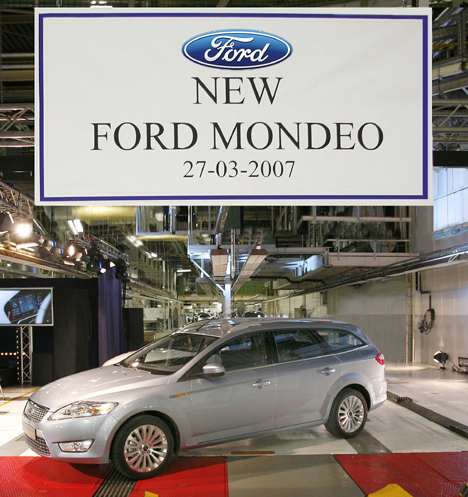