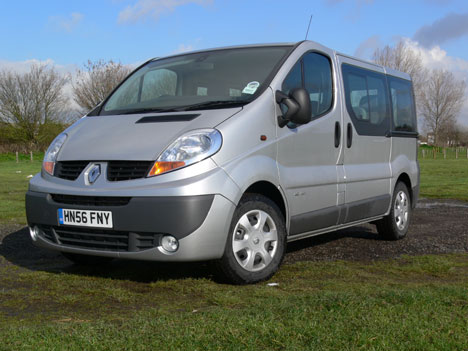 During my time as an LCV journalist, I must have driven more examples of this van – and its twin brothers the Vauxhall Vivaro and Nissan Primastar – than any other.

From its humble beginnings as a panel van in just one guise, you can now buy this vehicle in all manner of versions – long wheelbase, high roof, chassis-cab and of course minibus, as tested here.

It was almost like greeting an old friend again when the Trafic arrived at the Fleet Van offices. There was that familiar curvy-roofed cab that looked so outrageous when we first clapped eyes on it back in 2001 but is now such a common sight.

Inside, that supportive driver’s seat is still as big and comfortable as it ever was and under way, the Trafic still has those cutting edge road manners that make it such a popular fleet choice.

In fact, the only difference was all those seats in the back. Things have changed of course.

The Trafic now has a slightly revamped exterior with different shaped headlights which keep it looking fresh against an ever-increasing number of rivals while under the bonnet we now have a Euro IV-compliant 2.0-litre diesel engine with 90bhp or 115bhp on offer, or a 2.5-litre unit with 150bhp.

Our test model came with the 115bhp unit, although it hardly mattered what output it was as this van was governed down to a tad over 60mph.

It did wonders for the fuel consumption but you should have heard me cussing during a long trip up the M1. It’s no fun being overtaken by grannies in Nissan Micras, believe me.

Also worthy of note was the optional Quickshift6 gearbox which can be used either in fully automatic mode or as a kind of semi-automatic by nudging the gears up and down.

I’m not a great fan of these boxes as there is a distinct hesitancy on the up-changes.

But when I was stuck in the inevitable jam coming back down the M1 towards London, I was mighty grateful that I had it. It certainly makes driving a lot easier.

In the back, there was plenty of legroom for all the passengers and still a fair amount of room for luggage in the back.

THE Trafic may be getting on in years now, but we reckon there’s still little to beat it on the roads today.