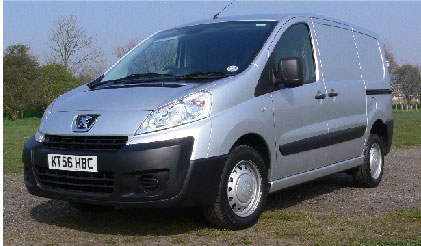 If you were buying a van and kitting it out with a few added extras, what would you choose?

Maybe an upgraded CD player, or sat-nav? Or how about air-conditioning or ESP traction control?

You know what I’d choose first and foremost? You’ll probably laugh but top of my list would be a couple of stretchy cargo nets.

A few months ago when the Peugeot Expert on test here was first launched, my partner and I were invited to drive one down to the Champagne region of France for a weekend at a rather exclusive hotel.

To stop all our luggage sliding around in the back, the lads from the Peugeot press office got a couple of cargo nets that you can buy for the 807 people carrier and stretched them across the rear of the van using the load-lashing eyes as hooks.

What a brilliant but simple idea, we thought.

How many times in the past have I put bags of shopping in the back of a van only to find them strewn across the length and breadth of the cargo area when I got home, eggs smashed and milk glogging around.

So when it came to getting an Expert for a six-month appraisal by Fleet Van, I particularly asked for some nets.

And what a Godsend they have proved.

Everything from glass mirrors to shopping bags have been poked under those nets and all have come out at the end of their journeys in one piece (see picture below).

The Expert is entering its third month at Fleet Van and all the testers so far have agreed that it is the ideal size for a panel van – big enough to get heaps of cargo in (five cubic metres to be precise) yet small enough to winkle into your average car parking space at Sainsbury’s on a Saturday morning.

The van has some nice added touches too. For example, if you forget to put your seatbelt on and fire up the engine of an average commercial vehicle, it starts bleeping at you straight away, which can be a right pain.

But the Expert waits until it is travelling at 5mph before it starts up.

Thus a driver can sit in the cab and fill in some paperwork while parked and the engine on without having to put up with an annoying noise while doing so.

Then there’s the bonnet catch.

A simple little affair you would imagine, but the Expert has this device hidden under the passenger door, so that would-be thieves can’t smash a side window and hoik up the catch.

It even fooled me when I tried to check the van’s oil the first time – as I didn’t have a manual with it, I ended up having to call for help at the Peugeot press office.

I also like the driver’s seat. Some manufacturers skimp on this item and use squabs that are so short that it feels rather like sitting on a bar stool. The Expert’s is good and deep and supports the back of my thighs right down to the back of the knees.

So what about niggles? Well, there are precious few so far. The middle seat doesn’t have much legroom for a second passenger, which has proved a problem on a couple of occasions, but then again most vans are driven with just the driver aboard.

And talking of space, there isn’t a great deal between the throttle and brake pedals either.

On a couple of occasions my size 10 hoof clad in Caterpillar boots has accidentally pressed both pedals at once, with fairly spectacular results in the heart department.

There are certainly no complaints about fuel consumption though. My first test showed the van returning 36.2mpg after a good variety of journeys including fast motorway dashes and round-town quickies and my last check-up saw this figure nudge up to 37.7mpg.

That’s a pretty fair return for a vehicle of this size.