Was this article useful?
Click the thumbs up >
Russia’s corporate car market is booming with potential for further massive growth in sales and related fleet service industries.

Datamonitor sees no signs of this trend abating, thanks to a growing economy, more cars being bought by increasing numbers of international firms based in the country, the growth of the leasing sector, the emergence of small and medium-sized enterprises and the modernisation of the public sector.

It added: “There is wide scope for growth, not only for new car sales, but also for related services such as corporate car financing and management.

“The gradual replacement of the relatively old corporate car parc is expected to increase sales of new cars. Also, international fleet management companies are hoping that the ownership-conscious market will start to recognise the benefits of operating a fleet on rental contracts, looked after by specialised firms.

“As happened in central and eastern Europe five years ago, in Russia this trend is also being kick-started by foreign companies.

“A few of the largest international leasing firms have already entered the market.

“ALD Automotive and Arval have both made an entry since 2005, and in the second half of 2006, Volvo became the first foreign carmaker in Russia to branch out into full-service leasing for corporate clients.”

Compared with the total market, Lada has a lower market share in the corporate car segment.

In 2005, the brand accounted for 46% of all new cars sold in Russia, but its market share in the corporate car market alone was estimated at 32%.

Datamonitor believes this difference largely reflects the significant proportion of corporate car sales in Russia absorbed by international companies. Lada and other Russian makes are still favoured by public sector organisations but even there, locally-assembled foreign brands, such as Ford and Hyundai, are increasing their share.

Among the non-Russian brands, the best-selling corporate car brand is Ford. In 2005, corporate car sales accounted for 23% of its total new car sales in Russia, netting 13,000 units. 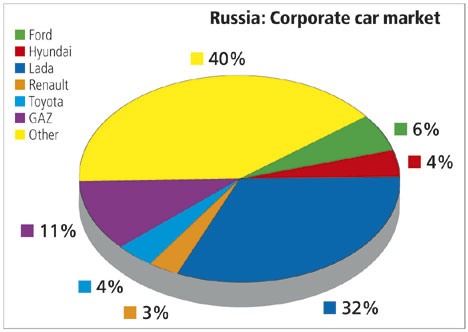