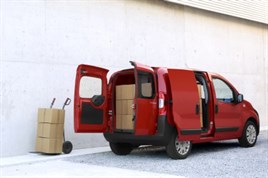 The latest vehicle to put itself up for long-term scrutiny by the Fleet News testers is the best van in Europe. Who says?

A panel of expert judges who have just voted it international van of the year, along with its twin brothers the Peugeot Bipper and Fiat Fiorino.

The Citroën Nemo is not only a new van but it sets off a new sector, too – urban LCV.

That means it’s built very much with city deliveries in mind and has a tight turning circle and diminutive outer measurements to cope with those narrow city streets.

One model managed a staggering 84mpg on a recent fuel economy marathon, although we aren’t exactly expecting that much frugality from the heavy-footed specimens working here.

The Nemo might be a pint-sized van but it certainly manages to squeeze a quart’s worth into its frame.

The cab seems to be almost as roomy as the one from its bigger brother the Berlingo, and there’s plenty of legroom for lanky specimens like me.

As an added extra we’ve also got the special extending passenger seat that folds down to load area level to allow for extra long items to be carried (£70).

One problem is that this seat is a skinny one, not like the driver’s, and it’s rather hard and uncomfortable.

My partner did complain about the passenger seat’s hardness on a long journey recently.

No such problems with the driver’s seat, which is big and supportive.

The Nemo is fairly well-specced without all these extras.

For the basic price of £9,515 (all prices ex-VAT) you get a driver’s airbag, ABS brakes, central locking with deadlocks, electric windows, height adjustable seatbelts and heated door mirrors.

It’s a shame that ESP traction control doesn’t appear either as standard or as a paid-for option.

All that adds up to a nippy little van that can be happily thrown into corners and come out smiling, while returning a claimed average of 62.8mpg.

We’ll be reporting on our own economy figures next time.

In the back there are plenty of load-lashing points and a wipe-clean floor.

The Nemo will carry 2.5 cubic metres of cargo weighing up to 610kg.

So far the signs are good.

It’s a nippy performer and great fun to drive as it’s
small enough not to have to worry about overhangs and massive lengths.