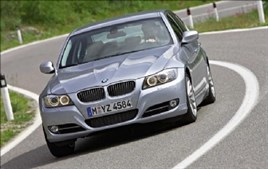 One of the world’s largest car surveys has named BMW as most reliable brand, with the 3 Series named the most reliable car in a historic win over Japanese brands.

The German marque topped the charts in this year’s annual FN50 reliability survey, which lists the cars considered most dependable among Britain’s biggest leasing companies.

BMW’s triumph takes the top slots from Toyota and Honda, which have consistently dominated the top of the table for years.

However, the Japanese manufacturers are still named as the second and third most reliable carmakers respectively according to the FN50 survey, which this year covered 881,000 vehicles.

The BMW 3 Series was the most rated model for reliability, ahead of the Toyota Avensis in second and Honda Accord.

The survey also found that Ford jumped from sixth place to fourth, while a string of other German brands take the next few places in the reliability honours, with Volkswagen fifth, Mercedes-Benz sixth and Audi seventh.

Among other fleet favourites topping the individual model chart was the Volkswagen Golf in fourth place, MINI in fifth, Mercedes-Benz C-Class in sixth and BMW 1 Series in seventh.

This survey of individual models this year covered 786,000 vehicles.

Only multi-marque leasing companies were included in the survey, covering the most reliable cars according to the number of breakdowns per 100 of each type of model on each leasing company’s fleet.

Points were awarded according to the number of times that brands or particular models appeared in the tables supplied by the leasing firms and also for the position in which they were placed.

An additional survey into the van fleets of the top leasing companies revealed that Ford was the most rated brand for reliability for the second year running, while the Ford Transit was most reliable model.

The reliability tables are part of the annual FN50 survey, which was revealed at a gala dinner tonight.

The FN50 lists the 50 largest leasing companies according to their funded fleet size, but also includes a range of additional research into the leasing industry and its customers.

One survey revealed that drivers are costing their employers millions of pounds a year in vehicle damage, with a record 39% incurring end-of-contract charges, and another that excess mileage charges jumped to an average of £534 on 28% of returned vehicles, equivalent to a £69 million-a-year bill for customers of leasing companies.