Fuel prices and recession - Fleet News' review of the year 2008

Grey fleet drivers were in the spotlight in January.

Almost two-thirds of private vehicles driven on company business failed roadworthy checks in a survey carried out by Total Motion.

The survey also found that around a third were not properly insured.

It supported Fleet News’ findings in October 2007 that 52% of companies do not have a policy to check insurance details of their grey fleet drivers.

Fleet managers were also urged to introduce robust drug policies, as one company revealed 40% of its employees that had been involved in a crash or suspected of being impaired at work, were abusing drugs or alcohol.

The month ended with a prediction that the company car would enjoy a resurgence in 2008.

And a growing number of businesses said they regarded the company car as an essential recruitment tool.

Warnings about young drivers hit the headlines in February.

A significant number of under-25s were found to take extreme risks while driving.

A major insurer confirmed that claims by drivers aged under 23 had increased by more than 300% over the past five years.

Congestion charging was a topic baffling fleet managers as the then mayor of London, Ken Livingstone talked about introducing emission-based charging. Porsche threatened to take him to court over the proposal.

Also on the environment front was the news that most companies introduce green fleet policies to improve their corporate image rather than to reduce their fleets’ carbon footprint.

The Budget threatened major change for fleets with a move towards making it financially more attractive to choose low-emission cars.

Reaction from the fleet industry was mixed but all commentators agreed that fleets and company car drivers would need to focus on lower polluting vehicles or pay the price.

There was some consolation for protesters about the two pence per litre fuel duty increase as it was postponed until October 1.

The Budget also brought the news that national road pricing was still a real possibility.

The Conservative candidate for the mayor of London told us he would scrap the planned £25 congestion charge for high polluting vehicles if he was elected.

Fleet managers reacted angrily to a survey suggesting they knew nothing about the Corporate Manslaughter Act, which came into force on April 6.

Contradicting the survey was research by Arval, which suggested that nearly three-quarters of fleets were involved in, or had completed, a review of their duty-of-care procedures for grey fleets drivers in advance of the legislation.

The Corporate Manslaughter Act was also predicted to see a return to company cars and a move away from cash alternatives.

The soaring price of fuel was another hot topic with fleets forced to pay thousands of pounds extra at the pumps.

In its latest fuel report, the AA warned to expect the worst.

Fleets were also told to be wary of ‘staged accidents’, with those operating in the north and Midlands most at risk of being targeted by criminal gangs.

The environment was found to be a low priority in vehicle procurement and fleets were warned of a “ticking timebomb” in respect of changes to capital allowances announced in the Budget.

The state of the used car market was causing concern with reports of over-supply and falling prices.

The Government announced plans for major reforms to the way people learn to drive, how they are tested and how motorists would be expected to embrace a culture of lifelong learning.

HM Revenue and Customs increased advisory fuel rates by up to 3p per mile as fuel prices rocketed and waived the usual one month’s notice so that firms could apply the new rates immediately.

It was revealed that company drivers were using cars less. Fleet managers put this down to the rising cost of fuel, better communications technology and appalling levels of congestion.

The news that Manchester intended to introduce a congestion charge prompted concern.

LeasePlan said it could “signal the beginning of a major headache for all UK firms running vehicle fleets”.

The RAC estimated that more than 40,000 fleet breakdown calls each year could be avoided with simple maintenance checks and driver training.

Fuel prices were still causing concern, with some police fleets admitting the associated costs were forcing them to cut recruitment.

Small fleets were urged to take action to keep their fuel bills under control after a survey by Northgate Vehicle Hire found 49% of those that run fewer than 50 vehicles had done nothing to minimise the impact.

There was a plus side to the high fuel prices with researchers saying that death rates would drop as motorists would slow down and drive less.

The chancellor postponed the 2p-per-litre increase in fuel duty, due to come into force on October 1.

Road rage was highlighted by an RAC report with more than half of business car drivers admitting to shouting, swearing and making rude gestures at other motorists.

Tougher sentencing guidelines were announced for causing death by dangerous driving or death by careless driving.

Fleets were complying with the smoking ban, according to a government study.

And in the used car market there were gloomy warnings over values.

The country’s two biggest auction houses, BCA and Manheim, said they would be increasing their charges.

The positive news in August was that fuel costs fell, with petrol prices in the UK dropping by 6.4 pence in a month.

August also saw calls for the government to publish statistics on at-work drink-driving. 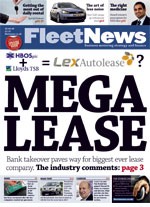 That month also saw warnings that daily rental costs were expected to rise due to the fall in residual values and a decline in corporate bookings.

Although the pressure from fuel costs eased, fleet managers were urged to continue pushing eco-driving.

And BP said it would still be accepting Arval fuel cards at its filling stations, over-turning August’s announcement.

Companies were told to step up their battle to cut crashes as figures from the Department for Transport revealed more than 30,000 cars were involved in at-work accidents last year.

We sought the views of more than 400 readers in an exclusive environmental survey and found that 96% believe the government’s current transport policy does not offer a realistic, viable or affordable alternative to car dependency.

BMW was voted the most dependable brand in the annual FN50 reliability survey. It was an historic win over
Toyota and Honda, which have consistently dominated the top of the table for years.

The Department for Transport rejected a proposal to develop a national network of car clubs, believing it was
not the best way to increase the number of clubs.

Concessions were made to plans for the Greater Manchester congestion charge, with residents due to take part in a postal referendum in December.

Nottingham, meanwhile, defended its plans to introduce a work-place parking levy in April 2010.

Fleets welcomed clarification of the changes to the capital allowance tax system (due to take effect in April 2009).

The Treasury confirmed that the new rules would not apply to cars already on fleets, ending months of confusion for fleet decision makers.

The number of company cars on Britain’s roads fell by 500,000 over the past nine years, according to an HMRC report.

There was also news that the fall in used van values had been less significant than first thought.