Margaret Thatcher has yet to wield her handbag across the British political, industrial and social landscape, a strike-ridden British Leyland is hoping that the Austin Princess will challenge the best-selling Ford Cortina, Angela Rippon presents a new programme called Top Gear and nobody can quite believe that Olivia Newton John got into those trousers in the year’s hit film Grease.

And, of course, Fleet News is launched, the brainchild of two brothers, Bill and Ross Jackson, following a conversation with an accountant who was saddled with trying to run his company’s fleet with no expertise.

Fleet News was born out of what many people see as the birth of the fleet industry, when Jim Callaghan’s pay freeze in the 1970s inspired firms to offer cars as a substitute for wages.

In fact, companies supplying cars to employees had been around for decades, evidenced by the foundation of the British Vehicle Rental and Leasing Association in 1967.

The third best-seller – the Morris Marina – managed more than 30,000 fewer registrations than the Escort.

For these cars, and for the lucky company car driver, a
1.6-litre engine managing 60bhp, 30mpg and some fetching brown vinyl was about the best that could be expected.

It was also very different for fleet managers, and its change reflects the way British society itself has shifted away from grimy industry to shiny corporations. 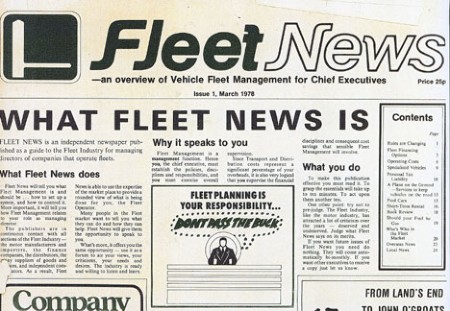 High on any list of important issues for fleet managers now are financing vehicles and controlling running costs, and indeed the first issue of Fleet News reflects this.

But like the two lead characters from television show Life on Mars, who are both out to catch criminals but with hugely varying methods, the fleet manager of 30 years ago needed a very different approach to today.

The DCI Gene Hunt approach of the 1970s was hands-on, and the same could be said of the 1978 fleet manager – hopefully without the flying fists workplace and sexism – rather than the more cerebral Sam Tyler approach of 2008.

For example, most fleet managers, many of whom had been engineers, bought and sold their own cars, which meant having industry contacts at both points of supply and disposal, an understanding of the market and what was selling where, and for what, and getting the cars to market.

Editorial in Fleet News dedicated a lot of column inches towards examining used prices, trends and results from auctions.

A fleet manager today has less need to concern themselves with actual used prices, and has more often than not come from an administration or accountancy background.

With the majority of cars contract hired, that risk and administration is dealt with by the leasing company.

A knowledge of used prices is helpful in ensuring you’re going to be getting competitive rental rates from a supplier, but rarely are they as crucial to day to day fleet management life as in 1978.

This more cerebral approach to the running of a car can be seen in the fact that the concept of wholelife costs was almost unheard of, with digital storage and communication way off.

Instead, economic analysis was less of a decisive factor in fleet purchase, with emotive issues of what the boss wanted as a car, and what you could get hold of, a major influence.

Indeed, in 1978 the then-editor of Fleet News Don Penny suggested the idea of a table of costs for cars, but ran into problems getting the project off the ground because it would have required a full time group of people calculating the figures.

Fleet departments often didn’t have calculators and computers were non-existent.

But everybody knows the price of living is massively different to 30 years ago.

The essential difference between the job of fleet manager, seen through the pages of Fleet News, now and then is in the amount of time spent on issues of people, rather than car management.

In 1978, a fleet manager was mainly concerned with the state of the metal and keeping it chugging along.

For a fleet manager now, the key focus is the person inside it.

Risk management was a non-existent subject on the pages of Fleet News and only started to become an issue in 1983, with the advent of the law requiring all drivers to wear a seatbelt.

Odd, when you consider that having an accident in a Cortina or similar metal box from the 1970s was more likely to put you in a wooden box.

Now, most of a fleet manager’s time is spent ensuring their drivers are safe and that they are served with everything necessary from the company to comply with duty of care. 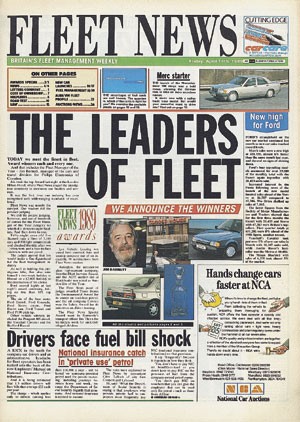 Helplines had appeared by 1989, just part of the support given by the paper to the fleet manager.

Recognition came in the shape of the Fleet News Awards, the first ever, held at the Hilton Hotel in London. Jim Barnett from Philips Electronics was the first Fleet Manager of the Year.

The first awards categories featured an environmental award which made a welcome return for the 2008 event.

Away from the celebrations, drivers were contemplating the prospect of petrol at £2 a gallon and a “national insurance” catch for lower-paid drivers receiving private fuel. 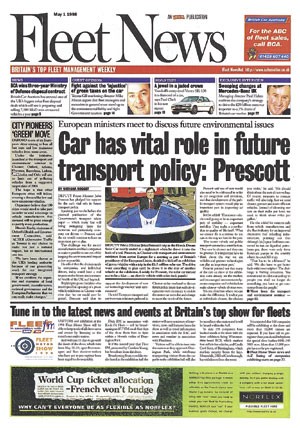 Deputy Prime Minister John Prescott brought some humour to this front page from 1998, squeezed into a Honda concept car that he went on to crash.

“Two Jags” continued to loom large in the paper until 2007.

The Fleet News website, formerly known as Fleet NewsNet, had been launched in 1996 and the address (confusingly www.automotive.co.uk) sat under the masthead.

That year’s Fleet Motor Show had its own radio station, Fleet FM.

In many ways this was the forerunner of our modern-day internet podcasts.

More than 10,000 people attended the four-day event at Donington Park.

Ever the fleet managers’ champion, this front page from 2002 tackles the two groups responsible for most fleet managers’ headaches – the government and the drivers of their own fleets.

By now the fleet industry had developed into a formidable lobby.

Both the fleet operators’ association ACFO and the British Vehicle Rental and Leasing Association (BVRLA) were calling on the new transport secretary Alistair Darling to be honest, transparent and prevent the introduction of the London congestion charge.