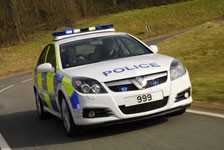 Millbrook Proving Ground in Bedfordshire is one of the foremost automotive test centres in the UK.

It is used year-round by manufacturers and other motoring firms to test new cars and technology before they are released to the general public.

But amid the environmental chambers and heavily-disguised prototypes, tucked away near the 700-acre site’s entrance is a niche operation that’s proving increasingly popular among the UK’s police forces.

In an anonymous-looking shed is a production line of GM vehicles.

They drive in one end, looking like any other car or van.

But they leave ready to tackle crime across the country, dramatically reducing the time and resources historically needed to bring police cars up to spec.

As the cars are prepared by the manufacturer, rather than a third party, the car and all its specialist equipment is covered by the same manufacturer warranty. This all adds up to a lot less hassle for police fleet operators.

GM has based its Special Vehicles operation at Millbrook since last year, and has just celebrated the milestone of 999 vehicles driving out of the production line, ready for action.

The operation has been so successful that work is already underway to expand the operation to cope with demand.

Dick Ellam, the facility’s manager, explains how the operation works.

“Cars come to us from various factories around Europe and all of them go through this production line,” he says.

The cars that come in are pretty much standard, but are engineered to the customer’s specifications.

"The exact options available are agreed by the manufacturers beforehand, but police forces wanting a high-specification engine don’t necessarily want the leather interior and other luxury extras found on cars destined for retail or more conventional fleet customers.

Other changes from standard cars include larger capacity batteries and alternators to cope with the extra power required by the vast array of electrical equipment that modern police vehicles carry.

Each car is given its own special vehicle identification number, in addition to the number found on cars bound for more normal fleet or retail lives. It also comes with a list of the various options due to be installed on it by the 17-strong staff at the factory.

As the car comes in to the production line, panel protectors are installed on the bodywork, and engineers begin to strip out the interior.

They install a special wiring loom designed to carry electricity to the extra equipment installed by GM, as well as any other specialised kit that individual forces put in when they take delivery of the car.

This requires seating and trim to be carefully removed and then replaced.

A giant tray sits on the bonnet of all the cars as they pass down the production line, and any components taken out of the car are kept in it, rather than being taken elsewhere where they run the risk of being lost.

Lights and the associated electrics are also installed behind the vehicle’s grille.

Other equipment fitted includes a light bar on the roof, which carries all the lighting options needed by forces today, such as flashing blue and reds and powerful side beams designed to light up alleyways as officers drive past.

In days gone by, installing such light bars has involved drilling holes in the roof, but recently a new version of the light bar has been developed that fits into the roof rail slots on the car.

This brings considerable time and expense benefits when constabulary cars reach the end of their police life, as there are no holes that need filling before the vehicle is remarketed.

Once all the equipment is installed and the car is driven out of the doors at the end of the line, the reflective livery is fitted and all the equipment tested, using the extensive facilities available at Millbrook.

Dick Ellam explains that bringing its blue light operation in-house gives GM a unique selling point over the opposition, cutting out middle men suppliers and offering a purpose-built solution straight from the manufacturer.

Customers get one invoice, and a full warranty. “Everything is tested for reliability and durability to the same standards as the base vehicles,” he says. 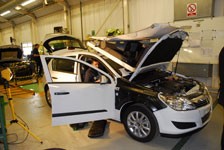 The consortium provides vehicles for Thames Valley, Bedfordshire, and Hertfordshire constabularies, as well as the Civil Nuclear Constabulary, which polices nuclear sites and materials.

“For us as a customer, the GM operation removes links from the supply chain,” he says.

“Before the operation went in-house, we were almost dealing with two separate organisations – one to get the cars, the other to get them converted for police use. There wasn’t a single point of contact.

“Given that the police need to set the standards for the marketplace and promote safety, it was always a bit of a risk for us not having manufacturer approval on the final build vehicle.

"If there were any problems, there were issues as to whether they were the reponsibility of the manufacturer or the converter.

Things took longer and there was much more administration.

“Now, we can get the product engineered to a high standard with the same people that we’re purchasing the vehicle from.

"We can liaise with a single point of contact and order a complete vehicle with confidence. It reduces hassle, and the time from order to delivery.”

As a representative of such an austere publication as Fleet News, it’s very important that I maintain a certain air of decorum and professionalism when on official business.

When handed the keys to the 999th car off the GM Special Vehicles production line, it took every ounce of my self-restraint to avoid letting out my inner 12-year-old.

Each blue light vehicle is built to the customer’s specifications, rather than fitting in to the traditional trim levels.

The car I drove is a fairly basic Vauxhall Vectra, but with a 2.8-litre V6 turbo under the bonnet.

As well as a siren and a plethora of flashing lights, the high-speed pursuit vehicle also has sports suspension and top of the line VXR brakes. It’s a serious bit of kit.

Fighting the urge to slide over the bonnet and roar off after any bad guys that might be roaming Millbrook Proving Ground, I settled for a drive around the Hill Circuit, a loop of alpine-style roads used by manufacturers to test new cars.

With 246bhp going through the front wheels, the Vectra has some serious acceleration, and thanks to the uprated suspension it handles beautifully through the tight corners of the Hill Circuit.

Stamp on the brakes in the approach to a bend and the huge discs and six-pot calipers wipe off speed with very little effort.

But despite some very impressive performance, the car never feels dramatic in the slightest.

Even when pitching in to bends at speeds that get the tyres squealing, everything feels safe and sturdy, far from the on-edge thrill-ride that I was expecting.

This, according to GM SV’s head of technical operations, Carl Field, is deliberate.

He says that the police don’t want exciting drives – they need the speed and handling that the Vectra provides but have to be able to do it as easily as possible.

In a real pursuit situation they need to be in complete control, communicate with fellow officers and not have to put every ounce of concentration into not flying off the road.

Barely able to stifle a huge grin and a few shouts of glee, I was allowed to hit the “blues and twos.

I enthusiastically prodded them all, and then punched another button to switch on the siren.

Nothing happened initially, but then Carl explained that the siren is operated by hitting the horn.

Doing so also cycles through the different siren tones, used on the job to increase awareness of drivers in front of the police car that officers are closing in on them at speed.

While out on the circuit, I came across two items of expensive exotica testing, presumably on behalf of their manufacturers.

Quite what the drivers of the Porsche 911 Turbo and Maserati Gran Turismo S thought as a police car, lights flashing and sirens wailing, closed in on them, is anyone’s guess.

They could be forgiven for thinking that they were safe from prosecution at a private test track, but no one gets away from the long arm of Tromans of the Yard.

Amusingly, they slowed down and pulled over to let me past.

For anyone that’s ever dreamed of driving a police car at breakneck velocities, I can only tell you that it’s just as much fun as you think it is.