The hydrogen fuel cell van has taken another step towards production reality, with the presentation of a collaborative research project between Intelligent Energy and PSA Peugeot Citroën.

Working at Intelligent Energy’s facility at Loughborough University, the project –called H2Origin – aims to bring the efficiency of a hydrogen fuel cell to an existing electric-powered vehicle.

Over the past three years, the two companies have worked on developing a demonstration vehicle based on an electric Peugeot Partner Origin van.

Intelligent Energy has produced a 10kW fuel cell system that fits into the area where a van would normally have its engine.

The hydrogen tanks are built into a quick-change rack slotted into the van below a false floor.

The original Partner electric vehicle had a range of around 48 miles.

However, with the addition of a fuel cell range extender, the vehicle now has a range of up to 186 miles.

Top speed is 62mph and it is said to hit 31mph from standstill in just 8.3 seconds.

The development of the fuel cell stack has been as important as the extended range as it is now capable of working at even lower temperatures.

The fuel cell (pictured) has been tested in temperatures as low as -20C and as high as 37C. 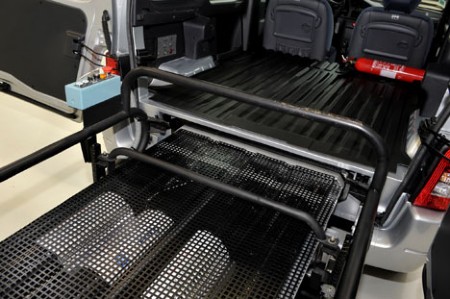 “Our fuel cell expertise and systems integration capabilities have been proven in developing the power system and incorporating it into this vehicle,” says Henri Winand, CEO of Intelligent Energy.

“We have made the fuel cell system robust and compact enough for real world clean motoring applications, and have gained invaluable experience through the PSA collaboration.”

The three-year project was partly funded by the Department for Business, Enterprise and Regulatory Reform through the Technology Strategy Board, which donated £1.7 million towards the £4 million project.

The raised floor in the load area has taken around 10% of the available volume, while the vehicle is 150kg heavier than a diesel Partner Origin.

However, with the range extender, it would be possible to fit a smaller battery pack, bringing the payload back to a similar figure to the diesel-powered van.

The fuel cell is capable of reaching full power within two minutes of start-up, even in low temperatures.

If mass-produced, Intelligent Energy predicts that the fuel cell would have an operating life of 5,000 hours, or around five years, assuming average use of three hours per day.

The company says that its Series 7 fuel cell design has a cell packing density twice that of many conventional designs, maximising volumetric power density.

Although the fuel cell stack is capable of more than 23bhp, the current is limited to around 100amps.

This ensures that there is a high cell voltage and a low parasitic power demand, resulting in a claimed system efficiency of 50% at full load.

The extended range has partly been achieved by a new method of storing the hydrogen which PSA is working on as part of a European programme known as StorHy (Storage of hydrogen for automotive applications).

StorHy has developed the exchangeable rack that stores hydrogen at 700bar, effectively doubling the amount of gas stored in the same space.

Having succeeded with the project, both Intelligent Energy and PSA Peugeot Citroën will continue to pursue research and evaluation of fuel cell technology.

To bring this sort of power source to the market, the companies will have to greatly reduce the cost of manufacture and complete stringent reliability and durability testing.

The size and weight of the hydrogen storage systems also need further development.

However, both firms are confident that the H2Origin marks a solid step on the path to a fuel cell vehicle.

Now up and running, the H2Origin offers four advantages over a standard electric Partner van.

The first is a reduction in greenhouse gas emissions, depending on the production of the hydrogen.

If it is produced using renewable energy then it has zero emissions.

Secondly, the vehicle emits no pollutants, as all that is produced is heat, water and electricity.

The third benefit is the speed of refuelling as rather than having to wait overnight for batteries to recharge, the hydrogen tank can be changed or refilled in a matter of minutes.

Lastly, there is a great reduction in noise, which is perhaps one of the most attractive benefits for home delivery companies.