Van prices continued to rise in September as BCA recorded yet another strong month for average values.

Following strong demand in the LCV sector during August, September has followed suit with average values rising to £3,862.

Once again average values for fleet and lease and dealer part-exchange vans rose, and although values for nearly-new vans slipped by £227, this appears to have been driven by model mix.

According to BCA’s latest Pulse report, average used LCV values across the board improved in September by £117 – over 3% – month on month. Values are now on a par with the peak of £3,868 recorded in January 2008. Year-on-year values are ahead by £672.

Average fleet and lease van values improved by £180 against August – up by 4.4%, following a 5.2% rise the previous month.

With values reaching £4,225, the £4K barrier has now been breached by fleet and lease vans for two consecutive months. 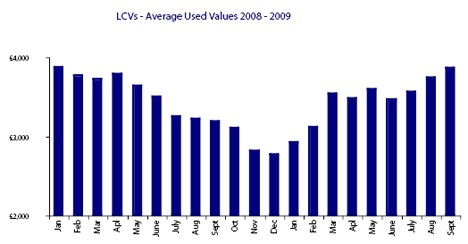 Direct entered fleet stock remains exceptionally desirable for both trade buyers and end users and competition has been intense in the auction hall as good retail-ready vans are in short supply. However, condition remains critical and traders remain wary of ‘buying work’.

Dealer-entered part-exchange stock rose by £193 to £2,487 – an increase of 8.4%, following rises of 7.5% and 9% rise in the two previous months. This sector is certainly benefiting from the shortage of good quality stock available from fleet and lease sources.

Nearly-new values fell to £8,807 in September – a fall of £227 – following an increase of over £1,000 in August. With supply relatively limited, model mix has a greater effect here than in other sectors.

The real strength in the market can be seen in the average performance against CAP, which improved on the 101.67% highpoint recorded in August to reach 104.66%.

For the second month running, all three sectors averaged over 100% of CAP in the same month, with fleet and lease reaching 104.44%, part-exchange vans realising 105.56% and nearly-new vans averaging 106.53%.

Duncan Ward, BCA’s general manager commercial sales, commented: “As we reported last month, we expected September values to be strong and that has certainly proved to be the case. With supplies of good retail quality vans remaining limited in September, prices remained very firm indeed.”

Ward added: “However, if supplies begin to increase significantly from corporate and dealer sources we could be seeing the current peak of market values – and it could be that values settle a little between now and Christmas.

“It would be unrealistic for values to keep on rising – with September values traditionally representing a peak in the annual price cycle – but these are exceptional times and the overall market is certainly firing on all cylinders.

Although average van values and CAP performance continue to improve, average age and mileage at remarketing remain stable, with no obvious signs of the effect of contract extensions.