Mention ‘LPG’ in a roomful of fleet managers and you’re likely to spark a debate.

As David Watts, fleet consultant at the Energy Saving Trust (EST), says: “It’s a contentious issue. There are probably as many good experiences with LPG as bad.”

One fleet manager in favour of LPG is Alan Hocking from Humberside Police. He’s in charge of 550 vehicles, with around 75% of the fleet running on LPG.

He is totally committed to LPG – even his personal car runs on it.

But while Alan Hocking is a fan, Mick Holderness, production director at Apex Lifts, isn’t.

He had six Vauxhall dual-fuel (petrol/LPG) Combo vans on his fleet, but returned them to Lex at the end of their lease because he was fed up with mechanical problems.

Julie Jenner, chairman of the fleet operators’ organisation ACFO, says many fleet managers who tried LPG in the past “had their fingers burned”.

“People will remember the issues with it previously,” she says. One painful issue for fleets was the government U-turn on grants, provided under the PowerShift scheme.

Time for a comeback?

Although some fleet managers are reluctant to choose LPG again, there are reasons for it to make a comeback.

Last year’s rocketing fuel prices certainly added some appeal to LPG, which is around half the price of diesel and petrol.

LPG conversions look particularly attractive for 4x4 vehicles and there is also growing interest from the used van market, with LPG enjoying a resurgence last year, according to BCA.

As for fuel strikes, Alan Hocking points out that during disputes his vehicles are able to stay on the road longer as they can carry both petrol and LPG.

In this context, it’s not surprising that converter companies are optimistic.

They have been talking about doubling business.

In October, Autogas said that almost half of motorists have considered converting their cars to run on LPG.

The EST says LPG vehicles cost about 30% less to run than petrol equivalents and approximately the same as diesel.

He started using it in 1998 and within four years had converted the whole fleet (27 cars and 10 commercial vehicles).

There are other financial benefits too -– provided the vehicles are listed on the PowerShift register (available on the EST website), including a 100% discount on the London Congestion Charge.

For some fleet managers, such as Glenn Ewen, of Clear Channel UK (who saved £100,000 on congestion charging) and Mick Holderness, this provided an incentive to run LPG vehicles.

However, both describe the administration work involved as ‘a nightmare’, as the vehicles have to be registered with TfL annually.

As for tax benefits, provided the vehicle has been through the type approval process and has a CO2 emissions figure for LPG, it should qualify for a 2% Benefit in Kind discount.

It may also be eligible for a discount on Vehicle Excise Duty. For instance, Proton says its dual-fuel vehicles qualify for a £20 discount.

In terms of the environment, LPG is billed as one of the cleanest fuels on the market. Its CO2 levels are on a par with diesel and are 10 to 15% less than petrol.

Another benefit, according to Mr Gilroy, has been improved residual values (RVs).

“All our vehicles are outright purchased and we use EurotaxGlass’s as a price guide. We normally achieve higher than that, and higher than on equivalent petrols.

“We sell them to customers and at auction houses in London.”

Mr Hocking also sells vehicles successfully through auction, although he has yet to see higher RVs.

Despite the benefits, some fleets remain unconvinced about LPG.

Ms Jenner says: “LPG is not a major player and the infrastructure is not there to support its usage on a grand scale.”

Currently, there are around 1,400 refuelling stations in the UK.

Mr Holderness says his drivers found it difficult to fill up – even if they located a garage that supplied LPG the pumps were frequently broken.

And Mr Gilroy admits that if his company did not have its own refuelling facilities and had to rely on forecourts he could not warrant the expense of LPG.

In fact, fleets who speak highly of LPG tend to be those with their own fuel bunk-ered on site, such as Humberside Police.

Mr Gilroy has discovered it can be profitable to resell LPG.

“We resell LPG from all our sites to other companies and private individuals.

"Basic refuelling facilities cost £5,000 but if you want to resell it costs £15,000. The facilities have paid for themselves though.”

Another hurdle fleets have to overcome is ensuring drivers run on LPG.

With dual-fuel vehicles it may be tempting for drivers to fill up with petrol and run on that.

Mr Gilroy says his vehicles run on LPG most of the time and fuel card data suggests drivers put petrol in once every two months, on average.

Mr Hocking, meanwhile, is pushing for drivers to run on LPG 90% of the time – currently 80% is being achieved.

The vehicles are fitted with black boxes and he monitors fuel use weekly.

“If we’d put the standard size tank on I think people would have been running out all the time and putting petrol in.”

LPG has been criticised for unreliability.

Over a five-year period, Mr Holderness endured around 300 days when his LPG vehicles were off the road. He is adamant that the faults were LPG related.

And it wasn’t just one vehicle playing up, all six had problems.

The worst case occurred last November when a driver ran out of LPG and the vehicle failed to automatically switch to petrol.

The driver tried to switch manually, but this also failed.

All the vehicles were on contract hire and it was Lex, not Apex Lifts, that had to bear the cost of repairs and supply replacement vehicles.

Mr Holderness says the vehicles had low mileage (between 58,000 and 84,000 over five years) and were serviced according to manufacturer recommendations (20,000 miles or annually).

What’s more, the conversions were manufacturer approved with Millbrook carrying them out on behalf of Vauxhall.

In contrast, Mr Black says the only breakdown in his fleet was when a driver failed to put any petrol in during a six-month period (dual-fuel vehicles require petrol to ignite, before switching to LPG).

Mr Gilroy and Mr Hocking both admit to ‘teething problems’ (such as vehicles only being able to run on petrol and misfires) in the early years.

LPG achieves lower mpg. Mr Hocking has seen 10 to 15% less (although this is balanced out by the reduced fuel prices).

Mr Ewen suggests LPG relies on vehicles covering a minimum mileage to make up the cost, “a necessary evil”.

Other drawbacks are that the tank can take up valuable boot space and there is no spare wheel. LPG cars are not yet allowed to use the Channel Tunnel.

So, is LPG viable? David Watts at the EST says it is, although it wouldn’t feature top on his list of things fleets must do to go green.

There are other alternatives, such as electric and hybrid vehicles.

Mr Gilroy’s advice is to speak to fleet managers who have experience of LPG and to try one or two vehicles, while Mr Hocking says: “Fuel savings justify going down the LPG road. I’d say ‘go for it’.” 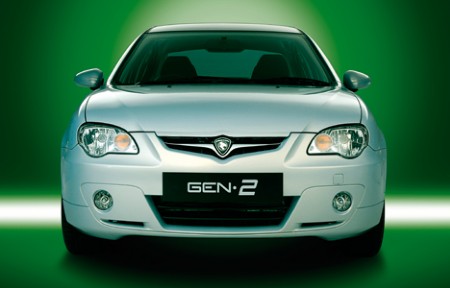 To find out first-hand what it’s like to drive a dual-fuel car I got behind the wheel of the GEN-2 ecoLogic, Proton’s latest offering.

Protons have found favour with Humberside Police – fleet manager Alan Hocking describes them as their “bread and butter vehicles”.

The ecoLogic’s biggest selling point is that the LPG conversion unit is included as standard, meaning it costs the same as its petrol-only equivalent.

Prices start at £9,995 and there is a choice of a saloon or hatchback.

Its sporty looks (spoiler and red leather trim interior) didn’t win me over but it handled well and gave a firm ride.

I tried switching between petrol and LPG and it was virtually impossible to feel any difference in performance.

When running on LPG a blue light flashes briefly on the central console.

There is also a series of lights to indicate how much LPG is remaining in the 66-litre tank.

The tank is located in the spare wheel well, but still leaves adequate boot space (unlike other dual-fuel vehicles).

Instead of a spare wheel there is a can of tyre foam.

What about filling up?

Nowhere in my hometown appeared to sell LPG, but I found a filling station off the A1.

There was no queue at the LPG pump which was a bonus, but it proved awkward to fill up and I couldn’t help looking longingly at the straightforward petrol nozzle.

Fleet Poll
Do you expect working from home to become your 'new normal'?
Vote
View all
41