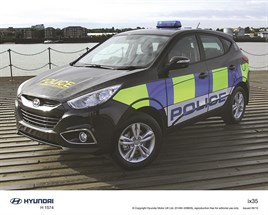 Audi and Hyundai will see their vehicles in police livery for the first time after they were named as preferred suppliers in a new five-year purchasing agreement.

However, they join a list of manufacturers that is actually being reduced to help achieve savings of more than £3 million a year.

Currently, around 5,600 vehicles across a number of makes and models are purchased every year by police forces across the UK, costing around £83 million.

But the new procurement framework, drawn up by the National Association of Police Fleet managers (NAPFM) and the National Policing Improvement Agency (NPIA), has reduced hundreds of vehicle options into 18 categories involving just 25 suppliers, cutting costs by £3.4 million every year.

Suppliers were chosen according to robust vehicle specifications, integration of specialist equipment, health and safety, environmental, electrical, as well as whole life costs.

“To put a £3.4m saving into context, this is the cost of an average force’s entire fleet budget,” explained Dr David Horne NPIA director of resources and procurement portfolio chairman for the Association of Chief Police Officers.

By undertaking a single procurement process for all police vehicles, it will save forces an average of £25,000 per procurement activity – a total potential saving of about £1.35 million over a four-year contract.

Delivery times will be cut by an average of four weeks and a new ‘ready to drive’ specification for the most popular and recognised police vehicle – the beat car – has been put in place.

Four suppliers, Ford, Vauxhall, Hyundai and Peugeot, will now deliver fully modified cars that are liveried to national standards and have IT, lightbars and safety equipment fully installed.

For the first time, the new framework also includes the fleets of all other blue light emergency services. Tim Mansbridge, fleet manager at Hampshire Fire and Rescue Service, said that they were “delighted” at the move.

The agreement comes in the wake of new national tyre framework, which was renegotiated by the NPIA and will help save an additional £3.1 million.

The deals were struck as part of the NPIA’s bid to find nearly £300m in non-IT related savings by 2013.

High performance (all other authorities): BMW, VW Group and Volvo.

Intermediate performance (all other authorities): Ford, GM and VW Group.

Low performance (all other authorities): Ford, GM, Hyundai and Peugeot.