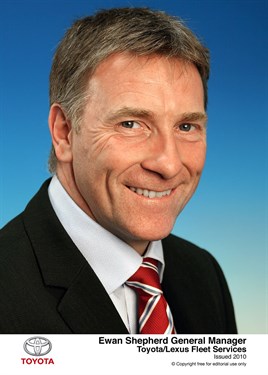 Ewan Shepherd is to become general manager Toyota and Lexus Fleet and Remarketing Services, succeeding Mark Roden who is leaving the company to join Westlands Toyota Group as managing director.

Shepherd, who will move to his new role on 1 November, has 11 years’ experience with Toyota, most recently as general manager Lexus operations.

He said: “I look forward to continuing the excellent work done by Mark and his team and moving forward to maximise the potential of our model ranges for fleet customers.

“With a growing line-up of full hybrid Toyota and Lexus models, including the new Auris HSD and forthcoming Lexus CT 200h, we can demonstrate unique, competitive advantages in the fleet market.”

Roden leaves Toyota after 15 years. However the company said it is delighted to retain him in the network as he moves to the Westlands Toyota Group which operates four Toyota outlets in Stourbridge, Bromsgrove, Hereford and Worcester.

Nick Poraj-Wilczynski, chairman of Westlands Toyota Group, said: “I am delighted to have secured Mark’s services. His experience at senior levels across the industry and in particular within Toyota make him ideally suited to drive the development of the group in the coming years.”