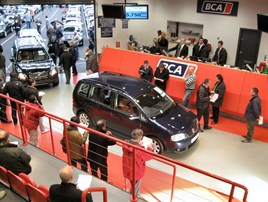 The average used car value at BCA climbed to £5,938 in September from £5,905 in August - equivalent to just over a half percent increase over the month. Performance against CAP Clean increased by over two points to 98.34% - the third highest figure recorded this year.

The figures come against a backdrop on a new car market that is continuing to slow, with September falling 8.9% to 335,246 units – the second lowest volume for the month since 1999 when twice yearly registrations were established. According to the SMMT, private demand fell again in September, but fleet demand posted solid growth.

BCA’s UK operations director Simon Henstock commented “Although September has not seen the big value rises that were typical of the pre-recession era, much of that was due to August being so strong, with many buyers seeking to acquire stock ahead of the anticipated September rush. Even so, prices did improve and the month saw a good level of interest from professional buyers, with conversion rates continuing to climb for many vendors. Sold volumes increased by around 4.5%, with much of that increase coming from the part-exchange sector.”

“With new car sales continuing to be slow, dealers are looking to used cars to deliver profitable retail opportunities. Demand remains high for cars in good, ready-to-retail condition and values for the best examples can outstrip guide expectations by hundreds or even thousands of pounds.”