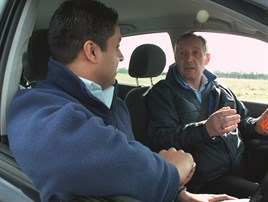 The effectiveness of work-related road safety measures, including driver training and black box technology, are to be investigated by the independent transport research centre, TRL.

There is a growing focus on improving the health and safety of at-work drivers, with legislation, such as the Corporate Manslaughter Act and the Health and Safety at Work Act, focusing fleets’ attention on the safety of drivers.

But while the numbers being killed and seriously injured on Britain’s roads is declining, it remains unclear how many crashes involve people who are at work at the time.
In addition, while a number of studies into work-related road safety exist, the TRL research aims to uncover evidence of their success for employees.

“It is important that we are able to understand the types of intervention that work well in reducing work-related road risk and those that do not work so well,” explained Dr Shaun Helman, who is leading the research.

“The only way of knowing this is to look at all of the evidence to establish what it tells us about different approaches.”

The TRL research, paid for by the Institution of Occupational Safety and Health (IOSH), will also identify where knowledge gaps are in the data, but it won’t have far to look to find one of the biggest flaws.

Estimates suggest some 200 workers are either killed or seriously injured every week on the UK’s roads, while experts agree that one-third of all crashes involve someone who was driving for work.

However, the true number remains unclear because the Health and Safety Executive (HSE) does not include such accidents under RIDDOR, its workplace injury and incident reporting system.

The Royal Society for the Prevention of Accidents (RoSPA) has been calling for a change in the law for a number of years and could yet get a helping hand.

Lord Young, in his report Common Sense, Common Safety, announced that the HSE will be undertaking a review of RIDDOR in January.

Roger Bibbings, RoSPA’s occupational safety adviser, said: “We will continue to champion the case for serious injuries in work-related crashes to be reportable and for the gathering of good accident data, which is absolutely vital if prevention is to be properly targeted and effective.”