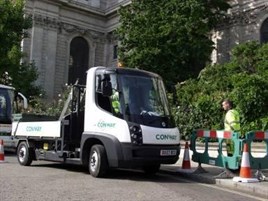 Electric vehicles capable of being used as rapid response vehicles for highways and cleansing operations have been trialled on City of London roads by contractor FM Conway.

The test runs of the tipper vehicle show that they can, on average, travel 70 miles per charge, with a typical day seeing vehicles working on between 10 and 20 separate jobs.

John Holliday, senior contracts manager at FM Conway commented: “Vehicles that use alternative fuels are one element that can contribute to a sustainable future. The City has stringent air quality targets and we ourselves have targets to cut fleet emissions.

“These trials, while a success, will be analysed to ensure that vehicles of this type are useful for the job they have to carry out. City of London is a small authority but the 70-mile charge limit may be an issue in the larger authorities.

Just under seven per cent of The City of London’s cleansing fleet is made up of electric vehicles, based on milk floats, with several that have been adapted into tipper vehicles for night-time operations and some specialist day works. A further four per cent of the fleet utilises LPG fuel.

Steve Presland, director of Highways and Cleansing, commented: “We have a target to reduce our emissions of air pollutants from our fleet by five per cent over two years and this includes our contractors’ fleets.

“The City is an Air Quality Management Area due to the poor air quality and we are developing an air quality strategy which will look at a range of ways to reduce emissions.

“Our contractors can help by looking at alternative fuels, electric vehicles and having up to date vehicles on the City contracts.”