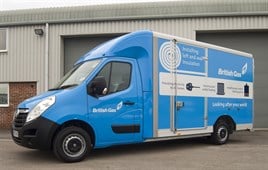 British Gas has commissioned Hitachi Capital Commercial Vehicle Services tocustomise a fleet of 140 3.5 tonne Vauxhall Movano vans for its expanding insulation business. The vehicles, which are due to be completed and delivered by the end of this year, have been designed to ensure the safety of the specialist installation team by guaranteeing that the van load is never overweight.

Illegally overloaded vans are a problem within the commercial vehicle industry. Earlier this year theVehicle and Operator Services Agency (VOSA) reported that of the 6,800 vans weighed last year, 73 per cent were overloaded and given a prohibition notice.

“The British Gas insulation services vans will be required to carry a cavity wall material blower, to insert insulation into the wall and loft areas, traditionally weighing over 550kg. Add to this the tools required by the engineers to do the job, several bales of insulation and the two man team, then it is easy to understand how a traditional van with an average payload of 1050kg can quickly become overweight,” explains Jon Lawes, divisional managing director at Hitachi Capital Commercial Vehicle Services.

The Vauxhall Movano has been introduced into the British Gas fleet, the body of which has been built from a lightweight composite material. This has increased the overall payload by 400kg to 1450kg. The leasing provider also developed a lightweight blower, weighing 50kg less than the standard UK version.

“Increasing the payload that the van can take is a big step forward in tackling the issue. But there is more that can be done. In conjunction with a leading European suspension manufacturer, we have developed a piece of hardware which is carried in the cab of the van and constantly weighs the vehicle. Based on a traffic light scheme, it will alert the driver if the load of the vehicle is nearing its limit or if the van is illegally overweight, allowing the crew to take immediate action,” adds Lawes.

“The dangers of travelling in overweight vehicles are well-known, and we do not take any risks when it comes to the safety of our employees. These vans have been customised for our specific needs so we can make sure that our crews travel safely and that we comply with all relevant regulations,” concludes Colin Marriott, general manager fleet at Centrica.

The larger payload will also enable British Gas to increase the number of insulation jobs per day, as the vans are now able to carry more bales of insulation.