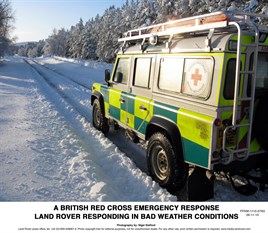 The first part of this new initiative involves the funding of 30 life-saving Automated External Defibrillators (AEDs) by Land Rover to enhance the capabilities of the UK-based emergency response vehicles, which were donated by the company to the British Red Cross in 2008.
A defibrillator is an important piece of equipment that can be used to save the life of someone suffering cardiac arrest. 30,000 people suffer from cardiac arrest each year, as a result of the heart failing to beat properly. An electric shock delivered by a defibrillator can get the heart beating again in its normal rhythm. Recent evidence shows that if a defibrillator is used within two to three minutes of cardiac arrest, up to 70 per cent of patients return to a normal heart rhythm and survive.

"Land Rover's valuable commitment to the British Red Cross has already ensured that we can swiftly respond to those who need our help", said Sir Nicholas Young, British Red Cross chief executive. "Equipping our Land Rover response vehicles with life-saving defibrillators means that we are even better prepared for the situations we respond to, including emergencies - particularly in hard-to-reach places - and supplying first aid cover at events throughout the UK."

Colin Green, managing director of Land Rover UK, added: "We are absolutely committed long term to supporting the great work of the British Red Cross in our home market. Our relationship, which originally dates back to 1954, has been borne out of a need to reach vulnerable people in remote areas. The capabilities of our vehicles, 30 of which we donated to the British Red Cross for use in the UK in 2008, are being used to do just that - whatever the terrain or conditions. Installing defibrillators in these emergency response vehicles will significantly enhance the British Red Cross' ability to treat people in need of immediate critical care."

The new collaboration between Land Rover UK and the British Red Cross is part of the major global partnership between Land Rover and the International Federation of Red Cross and Red Crescent Societies (IFRC), announced in August 2010. The partnership is a three-year global initiative focussed on 'Reaching Vulnerable People Around the World'. It involves Land Rover supporting national Red Cross societies in 15 countries, each country adopting a priority programme to support their Red Cross Society. Land Rover is also supporting two flagship humanitarian programmes in Sierra Leone and China, which will help over a 120,000 people over the next three years.