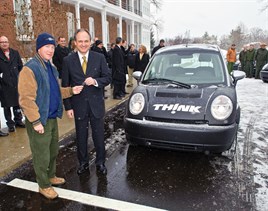 THINK has delivered its first U.S.-built cars to the State of Indiana for use in its government fleet. The 15 vehicles, which were shipped from THINK’s manufacturing facility in Elkhart, Ind., will be the first electric passenger vehicles with American-made, Lithium-ion batteries used in an American fleet operation.

“We’re proud to be the first manufacturer to deliver an all-electric car built in the U.S. with an advanced battery that suits the needs of government and commercial fleet operators,” said THINK ceo Barry Engle. “Our delivery today is part of a larger effort to help transform the U.S. light-duty vehicle fleet from one that is mostly dependent on imported oil, to one that is fueled entirely by domestically produced electric energy.”

“As part of that goal, we’ve made a strategic decision to target initially the more than 16 million fleet vehicles in operation in the U.S. market,” Mr. Engle added. “These fleets can jumpstart vehicle electrification in America’s cities and help push the industry past early adopters into mainstream consumer markets. Fleet sales will drive up vehicle and battery production volumes and drive down costs, which will benefit retail consumers.”

The THINK City model is an all-electric, zero-emission car designed in Scandinavia for fleet applications and urban commuters. The THINK City can travel 100 miles on a single charge, using Lithium-ion batteries manufactured in Indiana by Ener1, Inc.

“Nearly four years ago we set the goal of establishing our state as the ‘Silicon Valley’ for advanced vehicle manufacturing and have attracted top industry leaders, including THINK and Ener1, and now we’re seeing the fruits of this initiative,” said Governor Daniels. “We are committed to lead in state fleet electrification and call upon other states to join in and help get this vitally important industry off the ground to make electric cars available for everyone.”

“The economics of electric vehicles for fleet operators in terms of cost of ownership are ultimately very positive,” Department of Administration commissioner Robert Wynkoop said at the ceremony. “With defined travel routes and centralized re-charging and service, fleets are the natural platform to launch this new industry.”

Mass deployment of electric vehicles in the state of Indiana is being facilitated by Project Plug-IN, an initiative organized by the Energy Systems Network (ESN), which is creating one of the most advanced ecosystems to support electric transportation in the country. By early 2011, ESN will place 100 or more electric vehicles and supporting charging infrastructure with government and corporate fleets, as well as selected individual commuters, across the Indianapolis metropolitan area. Project Plug-IN enlists a wide range of industry and government partners to solve technical and regulatory challenges related to preparing communities for electric vehicles and is helping lead the national government-industry dialog to develop deployment community strategies.

“Our goal with Project Plug-IN is the seamless transition for consumers from gas-powered to electric cars,” said ESN president and ceo Paul Mitchell. “Making this happen in Indiana first has required collaboration among vehicle and battery manufacturers, electric utilities and government and regulatory agencies at all levels, as well as the willingness of fleet operators like the Department of Administration to participate. The response so far has been tremendous.”

THINK plans to roll out retail distribution in select U.S. cities in the second half of 2011.