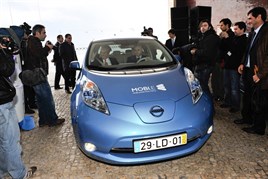 The keys to the cars were handed over to the CEO's of the nine companies belonging to the consortium, while a set of keys were also given to the Portuguese government who receive one Nissan Leaf on loan for test-drive purposes.

Prime Minister José Sócrates, who accepted the keys on behalf of the government, said: "We are extremely pleased to be introducing the electric vehicle in Portugal. After 3 years of collaborative work between the Government, public entities, the corporate consortium which developed the Mobi.e solution and Nissan, we have achieved the first smart, built-in charging network on a national scope, therefore we are the first country to welcome electric vehicles.

“By combining in a pioneer manner our commitment to renewable energies, the implementation of the smart charging network and the introduction of electric vehicles, Portugal will be in the lead of the transition to a more sustainable future."

Portugal was the first country in Europe to establish a direct electric vehicle partnership with the Renault-Nissan Alliance in November 2008, signing an agreement to build a widespread recharging network at Portugal and to promote the benefits of zero emission mobility.

Mobi.e, which is installing the network, has already set up charging points in 25 cities across the country. Another 1,300 normal chargers and 50 fast chargers will be set up by Summer 2011.