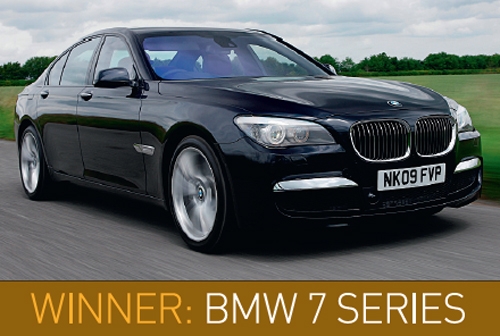 The BMW 7 Series has been named the Best Luxury Car in the 2010 Fleet News awards.

BMW’s achievements with the latest 7 Series are remarkable. During 2009 it increased the power and reduced the CO2 emissions of the 730d making it an even more compelling proposition in its class. It also introduced a 740d model using a twin-turbo version of the same six-cylinder diesel engine, improving performance further but with hardly any penalty in CO2 emissions or fuel consumption.

BMW’s fuel-saving technology gives it a clear advantage over rivals. The 7 Series sacrifices some of the road presence of the previous version for subtle elegance, and is rare in being as appealing to drive as it is to be driven in.

Judges’ comments
A category where CO2, running costs and fuel efficiency are a lower priority. But our winner not only offers the greatest luxury, it makes the grade financially and environmentally, too. In the past year, BMW has upgraded the 730d to produce fewer emissions.