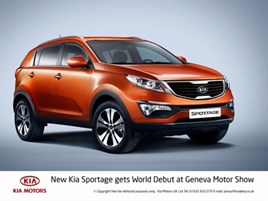 Longer, wider and lower than the previous model - by 90 mm, 15 mm and 60 mm respectively - the all-new design successfully retains the key SUV features - a commanding driving position, heightened sense of security and powerful road presence - that made the second-generation Kia Sportage so popular.

The second-generation Sportage was introduced in 2004 and marked a huge step forward for Kia. Over the next six years, it attracted thousands of new customers to Kia, and achieved global sales of more than 860,000 units - including 150,000 units in Western Europe.

Now, under the direction of Kia's Chief Design Officer Peter Schreyer, the Kia design teams have created a third-generation Sportage incorporating Kia's new design DNA and many features from the 2007 Kia Kue concept car, to be immediately identifiable and to stand out from potential rivals in an increasingly crowded segment.

"With the all-new Sportage, we have created a five-seat compact SUV with maximized customer appeal. It is urban-friendly and fully in tune with changing consumer expectations and demands," commented Hyoung-Keun Lee, President, Kia Motors Corporation.

"Despite the recent and ongoing global economic difficulties, Kia's market research indicates that demand for C-segment SUVs in Europe will grow steadily over the next five years as customers down-size their vehicles and new models focus attention on the segment.

"Customer response to the new Sportage in Europe has been entirely positive and we are confident that our latest model will significantly increase Kia's share of the compact SUV market," concludes President Lee.

New Sportage has an aerodynamic drag figure of Cd 0.37 - down from 0.40 - and a reduction in weight of 91 kg compared with the previous model enhancing fuel economy and refinement.

Choice of engines with enhanced economy and lowered emissions

When the full range of new Sportage models is on sale later this year, it will be available with four engines - two petrol and two diesel, ranging between 115 ps to 163 ps - manual and automatic transmissions and two-wheel or four-wheel drive. The model range presented to customers will vary country-by-country across Europe to suit local requirements and preferences. Final decisions on the UK range are yet to be made but all the engine variants will be available and Kia Motors (UK) Ltd., plans to take all the transmission and drive options.

For new Sportage the 2-litre diesel and petrol engines available at launch will be joined by smaller capacity engines available with fuel-stretching ISG (Intelligent Stop & Go) technology and with CO2 emissions from as low as 138 g/km.

Fitted as standard in most European countries, new safety features will include ESC with a new Roll-over Sensor that deploys the side airbags, curtain airbags and seatbelt pretensioners when required, Hillstart Assist Control to prevent roll-back when starting on an incline, Downhill Brake Control to limit speed during a steep descent and an ESS system which flashes the brake lights during an emergency.

A new rear-view safety camera providing on an LCD colour display integrated into the interior rear-view mirror will be available as an option on all models.

New Sportage will be manufactured at Kia's factory at Zilina, in Slovakia and buyers will be offered a choice up to 10 exterior colours and a black interior, trimmed in cloth, part-leather or full-leather that can be personalised with dark, light or orange accents. The quality of the cabin has been greatly improved. Available high-tech features will include: Xenon HID headlamps, LED running lights, keyless entry, engine start button, reversing safety camera, built-in sat-nav and full-length panoramic glass sunroof.

Kia's latest compact SUV will benefit from the brand's unique 7-Year Kia Warranty in Europe. The all-new Sportage range will begin to appear in showrooms across Europe during the summer.