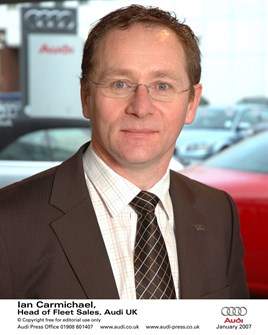 For the first time in its history, Audi liveried blue-light police cars could be seen on UK streets after the Volkswagen Group – Audi, Seat, Volkswagen and Skoda – said it will enter a joint tender document to the National Police Improvement Agency (NPIA).

Should the tender prove successful, all the group’s cars will be available to police forces, the MOD police and fire services across the country.

“This is first time that we will have a group response,” confirmed Iain Carmichael, head of Audi fleet sales. “There is expertise across the group that we can call on.”

That expertise sits in Skoda which has been particularly successful in blue light fleets.

Audi will also be watching Seat’s experience after it handed over its first liveried police car to Hampshire Police last week.

Seat has demonstration police vehicles in test with other forces but the sale of the Leon Ecomotive to the Hampshire force marks its arrival on the blue-light scene.

Volkswagen has a limited exposure to police fleets having liveried cars with just two Scottish forces.

Now Audi is after a slice of the high-visibility and attractive blue light business, especially the important traffic police fleets, which are dominated by two of Audi’s rivals.

“The feedback we have had back from the police fleet managers is yes they are interested in having Audi product, especially the 3.0-litre diesel engine,” says Carmichael.

“They will have some concerns about where Volvo is going as it a core component of a lot of traffic fleets and they may want to diversify away from their current suppliers, which are predominantly Volvo and BMW.”

Audi has a small presence in public sector fleets, although acceptance under the tender could signal a change for the premium German marque.

This new approach to its blue light tender, while not signalling a significant change in the way the four marques prospect for new fleet business, does come on the back of an increase in business won by the group rather than by one of its constituents.

“What increasingly happens is a fleet customer will come to ourselves, Volkswagen and increasingly Seat and Skoda and ask what the opportunity for it to secure all four or sometimes five brands, including the commercial vehicle brand, into a group supply agreement where it can leverage some additional support on that,” explains Carmichael. “And we are receptive to that.

Read the full exclusive interview with Iain Carmichael in the May 27th issue of Fleet News.