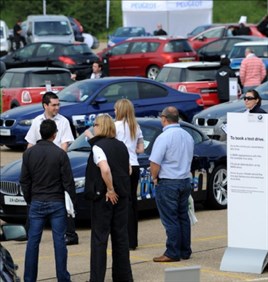 Greener Company Car in action will be the first chance to get behind the wheel of some of the latest low-emissions cars on sale in the UK.

Several major manufacturers have already signed up to the event at Millbrook Proving Ground, Bedfordshire, on June 29-30, and provide you with an opportunity to try their new models in a safe, controlled environment.

The 700 acre site has a variety of different road environments designed for evaluating vehicles, and many of these routes, including a twisty hill course and a high-speed bowl, will be open to attendees.

It will also be a chance to try some of the models introduced in the last 12 months you might have missed out on.

As with the most recent events visitors will still be able to drive the full model range of manufacturers which are attending the show, but as last year, there will be an emphasis on lower emission vehicles in each segment.

Fleet News research in 2009 revealed that 63% of companies have set a CO2 cap with most opting for a 160g/km limit. However, many are also looking to reduce their CO2 cap year-on-year.

The Greener Company Car in Action will also include a range of displays and advice areas dedicated to helping fleets lower their running costs and reduce their emissions.

2010 will see an increased focus on light commercial vehicles, as most visitors to Greener Company Car in Action also operate vans. Several manufacturers will have their latest models to take out on the range of driving circuits.

But with a growing range of low-CO2 cars arriving on the market, this is an unrivalled opportunity to sample the models on offer.

Alfa Romeo – Alfa launches the Giulietta, a new lower-medium car to replace the 147 in June. The new model comes with CO2 emissions starting at 114g/km. while the Mito gains new, more fuel-efficient MultiAir petrol engines for 2010. The 159 will also be available with the latest 1750 TB petrol engine and 2.0 JTDM 170bhp diesel.
Citroen – Citroen has had a busy year with two new small car ranges: the all new C3, and the sharp-looking DS3 – both of which offer versions with CO2 at less than 100g/km. Citroen also offers other compact and practical vehicles with CO2 at lower than 120g/km, including the C3 Picasso and Nemo Multispace. Citroen also offers a range of fuel-efficient vans.


Fiat – Fiat has adopted a range of cleaner petrol engines for 2010 called MultiAir, as well as introduced automatic stop-and-start in some models to help cut fuel consumption and reduce emissions.

Ford – With new lower-priced models joining the range in 2010 as well as upgraded diesel engines and the 99g/km Focus Econetic stop-start, Ford will have a wide choice of vehicles available for testing. Ford also has a range of vans, including low-emission Econetic versions.
Honda – The sporty new Honda CR-Z promises to be a hybrid that drivers will really enjoy, designed to feel sharp as well as deliver frugal operating costs. It joins the Insight and Civic Hybrid among the sub-120g/km range from Honda.

Kia – Kia began its introduction of fuel-saving EcoDynamics technology in 2009 in the Ceed lower-medium model range, including the five-door hatchback, the sporty three-door Proceed and the practical Ceed SW. Kia has also increased the number of mainstream models dipping below 120g/km.
Lexus – Lexus has become a hybrid-focused manufacturer, and with the sub-100g/km compact Lexus CT200h on the horizon this will be a chance to sample other hybrid models as well as the freshly revised IS saloon.
Mazda – The Mazda6 has been revised for 2010 with subtle improvements. CO2 emissions of diesel models have been reduced, while petrol versions also offer more efficient engines. Mazda will also
Peugeot – The latest versatile and award-winning 3008 and seven-seat 5008 will be available for evaluation from Peugeot. But the brand also has a new sports coupé in the RCZ, offered with three engines producing less than 160g/km, including a 139g/km 163bhp diesel.
Renault – A range of the latest cars and commercial vehicles will be available, including the new Wind compact roadster and Megane Coupe Cabriolet, as well as TomTom navigation equipped versions of the Megane and Laguna. The Kangoo, Trafic and the all new Master van will also be offered for evaluation
SEAT – With a revised Leon Ecomotive model achieving 99g/km and a range of Ecomotive Tech diesels with low CO2 emissions, there will be plenty for fleet operators to sample. Meanwhile the new Ibiza FR model offers user choosers a hot hatchback with CO2 emissions of 119g/km.
Toyota – The new Auris HSD petrol electric hybrid shares its sophisticated powertrain with the Prius, and is available with CO2 emissions as low as 89g/km. Along with the iQ 1.0-litre this gives Toyota three models below 100g/km.
Vauxhall – The Astra gains a new range of ecoFLEX diesel models from April giving customers the option of a 109g/km model in a choice of equipment grades. Improvements to the Corsa also see the introduction of low-CO2 ecoFlex diesels in 2010. Vauxhall also launched the new Movano large panel van in 2010.

To book your place at this years greener company Car in Action event go to http://www.fleetnews.co.uk/company-car-in-action/