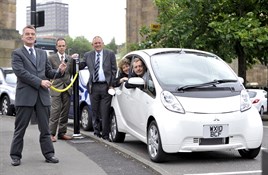 Six all-electric Mitsubishi i-MiEVs have arrived in North East England to form the next stage of low carbon vehicle trials taking place in the region.

As part of the Low Carbon Vehicle Procurement Programme (LCVPP) run by Cenex, the UK’s first Centre of Excellence for low carbon and fuel cell technologies, two cars will become part of the fleet at Gateshead Council, two at Newcastle City Council, one at Redcar and Cleveland Borough Council and one at Stockton-on-Tees Borough Council.

The i-MiEVs arrive in the region following the successful Green Vehicle Congress 2010 event that was held by Cenex in Gateshead in March, and will form the next phase of the ‘Smart Move’ trial, a major part of the collaboration between Cenex and Regional Development Agency One North East.

Mitsubishi Motors’ managing director, Lance Bradley said: “We are delighted that these forward-thinking local authorities will be able to experience the i-MiEVs in their everyday operational use. With a range of 80 miles, a top speed of 81mph, as well as minimal servicing and running costs and ample cabin space, it will prove that electric vehicles can be utilised without compromise in an organisation’s fleet.

“We are also thrilled to be supplying vehicles into North East England, one of the UK’s three Electric Car Hubs, where infrastructure development and electric vehicle usage comes hand in hand.”

The delivery of these new electric vehicles to the North East follows the first part of the Cenex ‘Smart Move’ trial which involved all four of the local authorities now using the i-MiEV and gave hundreds of drivers the chance to drive an electric car through placements in vehicle fleets and at public test drive events. One of the key findings of a report into the trial found that vehicle fleets like those at local authorities could provide a successful early market for electric vehicles.

Both Gateshead Council and Newcastle Council are already part of the Department for Transport’s Low Carbon Vehicle Procurement Programme, which is helping selected public bodies across the UK to update a number of commercial vehicles in their fleets with electric vans and trucks. As well as these electric cars, Gateshead Council has also ordered 10 electric and four hybrid vans to replace diesel powered vehicles. The two i-MiEVs add to Newcastle City Council’s current fleet of 19 electric powered vehicles with an additional four electric panel vans due for delivery within the next few months.

Councillor Wendy Taylor, executive member for Environment, Sustainability and Transport at Newcastle City Council said, “We are delighted to take delivery of these two full-electric vehicles which further demonstrates the council’s commitment to ultra low carbon vehicles and the promotion of sustainable travel.

“Both vehicles will be incorporated into the council’s fleet of pool vehicles for business use by our staff. We will continue to work with the private sector to expand the number of full-electric vehicles used in the city and to show that electric vehicles are a practical proposition capable of fulfilling their transport needs.

“The vehicles will be in daily use and will help to further reduce the council’s carbon footprint whilst benefiting the air quality in the city.”

Gateshead Council Cabinet Member for the Environment Councillor Martin Gannon said: “These cars are a concrete example of how Gateshead and the North East are leading the way in sustainable transport, they are proof that the electric vehicle revolution is here."

“We’re totally committed to playing a lead role in the rollout of electric vehicles and infrastructure. We have ordered the largest local authority fleet of electric and hybrid vehicles in the region to deliver key services to Gateshead residents, reducing carbon emissions and saving money at the same time.”

Sylvia Szintai, Redcar & Cleveland Borough Council's Cabinet Member for the Environment, said: "This is a very exciting development in environmental terms and in the financial savings that will be made. We are committed to promoting sustainable transport and such vehicles will be extremely useful in helping to cut our CO2 emissions."

Councillor Jennie Beaumont, Stockton Borough Council’s Cabinet Member for the Environment, said: “We already use some electric vehicles to collect rubbish from public bins but this is the first time we have our own electric car for general use.

“We’ve got £26,000 of funding from CENEX, the National Centre of Excellence for Low Carbon Vehicles, which reduces the cost to the Council to £387 per month for a four year lease period.  This will eventually pay for itself by the savings made in paying petrol claims for staff when travelling around the Borough carrying out their duties or attending meetings.

“In return for the sponsorship, we’ll be providing information about the car’s performance to CENEX for research purposes to help car industry with future electric car development.  Just about every car manufacturer is investing in electric cars so our experiences will help shape the future of car travel in the country.”

As this new industry develops in the UK, One North East is installing 1,300 charging points across the region as part of the national Plugged in Places programme, which is supported by all 12 of the North East’s local authorities. One North East is also delivering the UK’s Low Carbon Economic Area for Ultra Low Carbon Vehicles, which will include the national Skills Academy for Sustainable Manufacturing and Innovation, the proposed National Low Carbon Vehicle Research and Development Centre, an open access test track to trial the use of new technologies and the Turbine Business Park.

Partners in North East England are also part of a £10m demonstrator project, part-funded by the Technology Strategy Board as part of its national programme, which will see 35 new electric passenger vehicles developed and trialled here.

Dr Colin Herron, manufacturing and productivity manager at One North East, said: “We enjoy a very productive partnership with colleagues at Cenex and I am delighted to see that our enthusiasm for this exciting new industry continues to be matched by our local authority partners. As further vehicles arrive on our roads in the coming months and our network of charging points grows further, it will become more and more common to see vehicles plugging in across the North East.”

Keep up to date with all the latest car reviews with fleet news.