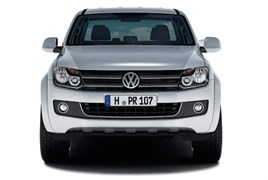 Volkswagen has postponed the UK launch of its new Amarok 4x4 until next year, after experiencing a huge rush of orders from South America.

The Amarok, the German manufacturer’s first foray into the 4x4 sector, is being built at Pachecho, near Buenos Aires in Argentina and already, 25,000 orders have been taken in its home country.

The truck was originally scheduled to arrive in Europe in September but best estimates now are the end of the first quarter in 2011.

David George, head or marketing at Volkswagen, told Fleet News: “It’s very disappointing as we have been gearing up our marketing strategy for a September launch, but we have to realise that Europe is a relatively small market for this type of vehicle.

"There are huge demands for the Amarok in South America and I’d rather wait until we have a full complement of vehicles in stock than take orders and then leave customers waiting for months until their vehicles arrive.”

The Amarok promises to raise the stakes in the sector with typically high Volkswagen build quality and true car-like ride and handling, while still offering robust performance off road.

Stefan Lutz, head of development at Volkswagen, said he was confident that the Amarok would lead the sector that is at present dominated by the Nissan Navara, Ford Ranger (a rebadged Mazda B series), Toyota Hilux and Mitsubishi L200.

He said: “We are a new entrant in this segment and we are not welcome. We are giving the Japanese manufacturers a big wake-up call as we believe the Amarok beats their vehicles on robustness, build quality, fuel economy and CO2 emissions.”

Keep up to date with all the latest Volkswagen car reviews with Fleet News.