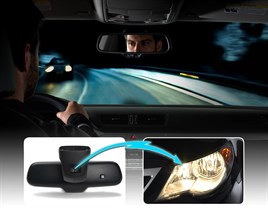 Gentex Corporation has announced that its SmartBeam high-beam assist system is now available on nine Volkswagen models - the first time that SmartBeam has been offered by the German manufacturer.

SmartBeam uses a miniature camera-on-a-chip combined with algorithmic decision-making to automatically operate a vehicle's high beams in order to optimise their usage according to surrounding traffic conditions. The system maximises forward lighting while eliminating the repetitive task of turning the high beams on and off manually.

SmartBeam is integrated into a Gentex auto-dimming mirror, which automatically darkens to eliminate glare from the headlamps of vehicles approaching from the rear.

“Gentex’s SmartBeam system was the first of its kind, and it continues to gain popularity around the world,” said Gentex senior vice president Enoch Jen. “This rollout across the VW Group shows how the feature is helping to improve forward lighting and driver safety on vehicles in every market segment, including compact cars, SUVs and minivans.”

Gentex’s SmartBeam was designed to optimise high-beam usage on any type of vehicle. In the case of the VW Group, SmartBeam is controlling the auto high-beam function on a range of vehicles, from the VW Golf compact car to the spacious, multi-purpose Sharan.