Renault and Hyundai are big winners in fleet sales

As has been the case for a few months, the fleet share of 54.21% in July was back to its pre-recession level.

Within that apparent stability, however, there were big shifts in manufacturer shares.

Some manufacturers (e.g. Ford, Toyota) have deliberately stood back from the discounting battle and focused on profit per unit rather than volume.

At the same time, other manufacturers have concentrated on pumping up the volume.

The two biggest gainers so far this year have been Renault and Hyundai, albeit for different reasons.

Renault chose in 2008/2009 to rebuild its business around better margins, especially when the pound crashed against the euro.

Now it is more focused on share once again, helped by the new Megane and facelifted Clio plus the slight rise in the pound this year.

In contrast, Hyundai is building share rather than recovering it.

It wants to leverage its scrappage success with private buyers into success with fleets and feels it has the products to do so.

It is certainly a far cry from the previous importer (Lex) which always believed that the then Hyundai model range was never going to cut it in the fleet market, so made little effort.

Now Hyundai has the i30, it wants a slice of the action.

At first glance, fleet sales growth of 134% in a year looks too fast to be sustainable, but even the current figure only represents a fleet proportion of 28.6% of total sales, which is still fairly modest.

Certainly Hyundai has a low-cost base which gives it plenty of room to deal: as a young company it is prob-ably blissfully unaware of the concept of 'pensions deficit', or many of the other legacy costs older car manufacturers face.

However, it is not all plain sailing for the Koreans. Chevrolet has not shared in the growth of Hyundai and Kia, which have the air of the coming brands about them: even the Japanese namecheck Hyundai-Kia as a threat, not something you often hear about Chevrolet.

At a model level, the most interesting figure comes from the Toyota Prius, which now gets more than 60% of its sales from fleet customers and has more than doubled fleet sales in the past year.

With so many fleets looking to clamp down on CO2 emissions, and so many user-choosers looking to save on BIK, this bodes well for forthcoming low-emission cars like the Vauxhall Ampera and Nissan Leaf.

Ten years ago, hybrids were for beardie-weirdies – together with electric vehicles, they could become the C and D segment company cars of choice. 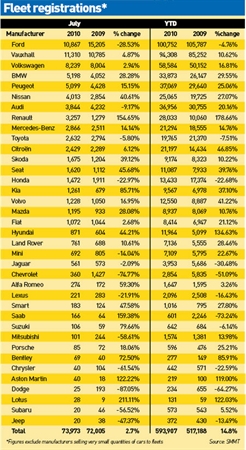