Ex-fleet cars are continuing to feel the pinch as the pressure on prices mounted during July, with experts predicting the possibility of further falls in the coming months.

Manheim Remarketing reports that average wholesale used car values in the fleet sector fell by 3.6% (£219) to £5,925 last month following a drop of 7% in June.

This was the fourth consecutive monthly fall and values are now 12.2% (£824) lower than in March this year.

With model mix very similar to last month, this was a reflection of softer demand as average prices fell in two of the three main product sectors.

Despite this, sold volumes actually increased by just over 1% in July compared to June.

“Levels of economic confidence and consumer demand continue to cause concern as we enter one of the quietest periods of the year,” says Manheim Remarketing managing director Mike Pilkington.

“As the summer ends, we will then hit the public spending review announcements, which are also likely to affect consumer confidence.

"So unless consumer demand picks up in the short term, or there is a reduction in vehicle supply, then the pressure on prices will remain.”

Volume values have been declining gently since April when they peaked at £5,835.

In contrast, budget fleet/lease car values rose to £3,359, a substantial 5.8% increase – with the caveat that numbers are low in this sector and model mix has a disproportionate effect on value.

“Prices have continued to be under some pressure, but sales volumes have held up well in July and demand is there for vehicles that are valued in line with their condition and market expectations,” says BCA communications director Tony Gannon.

“We are seeing seasonal patterns now and should expect these to continue over the rest of this year.”

But Wilsons Auctions reports a “quiet resurgence” in fleet sales, with prestige vehicles in particular outperforming the market at its site in Stratford-Upon-Avon.

This is a result of many fleets extending contracts last year instead of putting on new stock due to the economic climate.

But BCA adds that once again a relatively rich mix of cars disguised some of the pressures in the marketplace and conversion rates remain fragile. 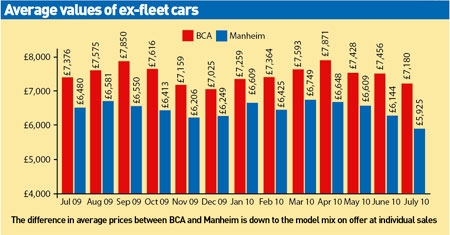