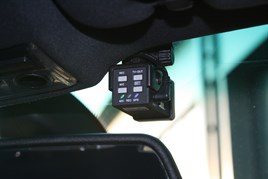 The Exeros Cube is claimed by the makers to be the world’s smallest in-vehicle black box system.

It can commonly be used as an accident recorder using a telemetry sensor for assessing 3D vehicle movement - acceleration, deceleration, left, right and vertical movement - and data logger that can help fleets lower insurance premiums by allowing easy recognition and proof of fault.

The system can also be used as a driver management tool, providing the fleet manager with information on driving habits and styles which can inform on the need for driver training and where greener driving.

The Cube, which features a 30FPS video camera, a built-in microphone and a GPS module for location logging, also acts as an asset security device that can monitor and record activity in vehicle loading bays, the driver and passenger areas and in-vehicle stock.

The company has also launched a 4-camera digital video recorder & data system. It records from up to four cameras and from up to two audio sources simultaneously.

It also logs vehicle positioning information from GPS and similar to the Cube, uses telemetry sensors for recording vehicle movement.

The system can also be attached to a dedicated 3G/3.5G module for live vehicle monitoring and vehicle tracking. Fleet managers can live monitor up to 352 vehicles simultaneously with a single software license from your fleet base, all at the same time.

A panic feature is included with the option of Bluetooth pairing so if a driver initiates the panic button without the 3G/3.5G module, the system will use the driver’s phone to send still images of all the cameras to your base station.