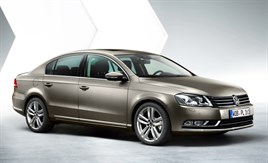 Volkswagen has unveiled what it calls the seventh-generation Passat saloon, which will introduce luxury car features as well as a sub-110g/km saloon.

Arriving with customers in the UK in January, the Passat is brimming with new technology, including massaging front seats and an automatic emergency braking system.

The diesel range starts with the most efficient engine, the 1.6-litre TDI unit producing 105bhp.

Equipped with this engine and the BlueMotion package of changes including aerodynamic modifications, stop-start and battery regeneration, the new Passat can achieve a combined 68.8mpg while emitting 109 g/km of CO2.

Joining the 1.6-litre TDI is a 2.0-litre TDI engine available in two power outputs – 140bhp and 170bhp. Each of the engine ranges can be specified with a choice of manual or DSG gearboxes.

The optional new city emergency braking function, a part of the automatic distance control (ADC) system, automatically engages the brakes at speeds below 18mph should an unavoidable collision be sensed by the vehicle.

The system is also able to accelerate the vehicle automatically should it detect an imminent rear end collision providing the vehicle sees a clear space ahead.

In addition, the new Passat can be fitted with an automatic fatigue detection system that monitors the driver’s inputs and emits an audible and visual warning to recommend a break if required.

Full pricing and specification will be announced later this month.