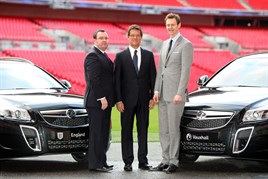 Vauxhall has become the first organisation to sign title partnership agreements with all four football associations of England, Scotland, Northern Ireland and Wales.

All four contracts will run up to and including the 2014 World Cup in Brazil and include sponsorship of all national teams and a full inventory of other grass roots national football programmes.

After announcing the sponsorships at Wembley, the Cardiff City Stadium, Windsor Park and Hampden Park, Vauxhall managing director Duncan Aldred said: "It is a great honour for us to become the first company ever to be the lead sponsor of all four of the governing bodies of football in England, Northern Ireland, Scotland and Wales at the same time.

"In partnership with the FAs, it is our intention to become a driving force behind football supporting the senior and grass roots game across the whole of the UK.

"We know how passionate all four countries are about football and as a deeply-rooted British organisation we also want to demonstrate our enthusiasm and commitment.

"Football and cars are two of Britain's greatest passions and these partnerships are a clear and unequivocal sign that Vauxhall is determined to be Britain's number one supporter of football.

"We are not only committed to helping the England, Scotland, Northern Ireland and Wales national senior teams compete successfully on the international stage but as a forward-thinking company we are also focussed on developing grass roots initiatives covering youth, junior football and women's football."

Alex Horne, the FA's general secretary, said: "We are delighted to have concluded an agreement with an organisation of Vauxhall's calibre.

"Vauxhall is a perfect fit in so many ways, not least the fact they are a British vehicle manufacturer with a 108-year heritage of car manufacturing in the UK."

"Their ongoing support will be vital in helping and assisting us achieve our objectives and expanding our footballing portfolio."

Stewart Regan, Scottish FA chief executive, said: "We are proud to have such a respected and enduring brand as Vauxhall as our National Teams Sponsor.

"I am certain the history and heritage of the Vauxhall brand will dovetail perfectly with the national teams' future hopes and aspirations."

"I look forward to a prosperous partnership that will inspire Craig Levein's side for the second half of our UEFA Euro 2012 qualification campaign and beyond."

Football Association of Wales (FAW) chief executive Jonathan Ford said: "To announce a lead partner of the calibre of Vauxhall is a great boost to our organisation.

"We look forward to a long and mutually beneficial partnership."