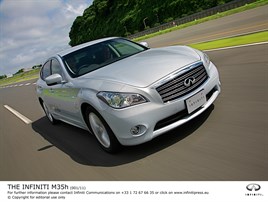 Available throughout Europe from the spring (depending on country), Infiniti's first Direct Response Hybrid car to go on sale, technical specifications and performance figures have now been released. The key figures include;

The Infiniti M35h's near-50mpg extra urban consumption is 10mpg, while in the VED stakes its place in Band G is two bands lower, cutting the first-year rate of road tax for the Infiniti almost in half, from £300 to £155. Similarly the M35h's lower CO2 results in more affordable company car tax bills, with a liability in 2011/12 of 23% rather than its less powerful rival's 26%.

The combination of high performance - tinged with true Infiniti driver appeal - and low emissions is the direct result of a 68 PS (50 kW) electric motor that can power the Infiniti M35h more often, at higher speeds and for longer periods than rival hybrids.

Capable of cruising on emissions-free electric power alone at speeds up to around 80 km/h, Infiniti's Direct Response Hybrid system extends the hybrid's advantage from slow-moving city traffic to the open highway.

Despite running in silent electric mode at every opportunity, the Infiniti M35h cannot surprise pedestrians and the visually impaired as it approaches thanks to Approaching Vehicle Sound for Pedestrians (VSP) as standard, VSP emits a pleasing, non-intrusive sound that varies in pitch and volume at vehicle speeds up to 30 km/h.

The Infiniti M35h's petrol engine is a 3.5-litre V6 with 306 PS (225kW). It is part of the same family of V6s as the 3.7-litre unit in the M37 but with torque characteristics to complement the low-down pulling power - 270 Nm at 1770rpm - of the electric motor. Prices for the Infiniti M35h , which will be offered in either GT or GT Premium grades, are due to be announced before the Geneva Motor Show.