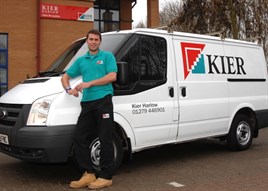 Kier Harlow has been awarded the title of a ‘Business Champion’ under the ‘Driving for Better Business’ campaign in recognition of its efforts to promote road safety to its employees and reduce its environmental impact. Over the past year Kier Harlow, a division of Kier Building Maintenance, has been involved with the campaign organised by RoadSafe, to ensure the safety of its workers and those in the Harlow district.

Driver education and the implementation of a wide range of road safety initiatives have resulted in a reduction in accidents and significant financial savings at Kier Harlow. Between 2007 and 2009 the building maintenance and environmental services business reduced its vehicle-related incidents that did not result in injury from 42 to 20.
As part of the company’s ongoing focus to increase driver safety, six Kier Harlow employees recently attended a ‘Young Driver Road Risk’ workshop organised by Essex County Council in association with the Driving for Better Business campaign. The one-day workshop was specifically designed for young drivers aged between 17 to 25 and included theory sessions followed by an afternoon of practical driving with advanced driving instructors. Topics covered on the day included hazard perception and distractions, factors contributing to accidents and journey planning.

In order to help reduce Kier Harlow’s impact on the environment, fuel usage is closely monitored by the company. This monitoring identified a simple, quick and highly effective way to instantly make carbon savings - reducing the drag factor of the fleet. It did this by removing all roof racks from commercial vans, except for a handful of vehicles which were used by the working at heights team (the only team members to use ladders within Kier Building Maintenance). This initiative has been followed throughout Kier Building Maintenance as the company has set itself challenging environmental targets for its existing fleet. Over the next two to three years it aims to reduce the fleet’s emissions by 40 to 50 per cent and the last 12 months have not only seen the company go some way to achieving this target, but also implement a range of safety initiatives to safeguard its team and the wider communities in which it works.

Kier Harlow health & safety advisor, Stella Hinson, said: “Kier Harlow has a fleet of 135 vehicles in total which includes HGVs, street sweepers, tractors and company cars. We take the responsibility of our staff and their impact on the local community very seriously. Road safety is imperative to Kier Harlow as we rely on our fleet to carry out the building maintenance and repairs, street cleaning and gardening in all areas of the town from major roads, to small estate roads, to cycle paths, play areas and woodland areas.”

Driving for Better Business campaign co-director, Caroline Scurr, said: “Not only has Kier Harlow introduced a first-class safe driving at work strategy, but the company is taking the message to its subcontractors, which will result in more employers implementing similar initiatives.

“This is exactly what the campaign is about: business champions such as Kier Harlow using their knowledge and expertise to help other organisations reduce their at-work driving risk exposure.”