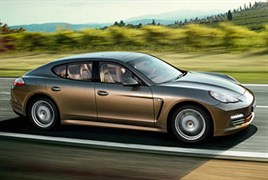 Porsche will not be changing its sales tact in order to appeal more to fleet users, despite launching two new models that will have upper-level business users salivating.

The four-seat Panamera Diesel and Panamera S Hybrid models each offer CO2 emissions and fuel economy ratings that put them well into ‘sensible’ running cost territory – the latter in particular.

That’s because the Panamera S Hybrid is the first Porsche ever to drop below the vital sub-160g/km bracket, making it eligible for the 20 percent company car writing down allowance.

He added that “most Panamera drivers are business users anyway,” regardless of whether they choose to buy their car through the company or not.

The 41.5mpg S Hybrid’s prohibitive cost means that Porsche expects it to take only ten percent of total Panamera sales.

That’s no surprise when you consider that the new Diesel version actually beats it for fuel economy, with 43.5mpg; the Hybrid’s lower CO2 figure (159g/km against 172 for the Diesel) is partly explained because the Hybrid can run on zero-emissions electric power for a short time.

The Diesel will continue to be the big seller - at £62,000 it’s expected to make up half of Panamera sales.

And because the company has never been “price driven,” as Porsche’s Nick Perry told us, the company won’t be reaching out to fleet customers specifically. He said: “We’ve traditionally sold lots of cars to businesses – entrepreneurs and business users that choose to buy them.

“Rather than having a fleet orientation, we’ve sold to the customer. The customer experience doesn’t change. give us a great opportunity to have a dialogue with a wider customer base.”